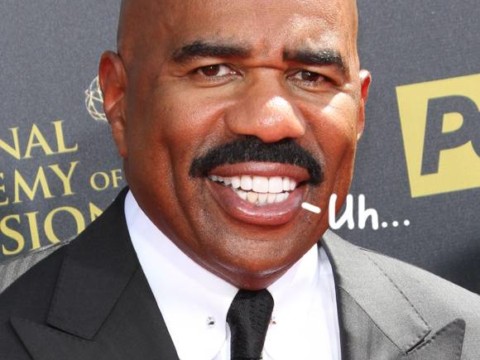 Damn! It seems like Steve Harvey isn’t as friendly as he seems!

As we reported, the daytime talk show host made headlines when he released a memo to his employees asking them to leave him alone whenever they see him on set. The Family Feud star has not only confirmed the letter’s existence, he stands by it and refuses to apologize for his diva-like demands.

Sadly, this isn’t the last of his scandals!

A couple of weeks ago, when word spread that the show was going to move from Chicago to Los Angeles, a couple of dozen staffers got axed. To lessen the blow, the now-former employees were told they would be treated to a luxurious wrap party on a river boat.

However, after the RSVPs began piling up, party organizers realized they weren’t able to accommodate everyone and had to kick people off the invite list! According to a source:

“But after people RSVP’d, they were told there weren’t enough seats for everyone, and some people can’t come!”

Some of these pink-slipped employees have been working for the funny man for years!

“These are people that were loyal to the show for years… To be fired and then un-invited from the wrap party is just cold. You’d think they’d have rented a big enough boat from the beginning!”

To add insult to injury, Steve isn’t even coming to the wrap party! Shows how much he cares!

In the end, production crew were given “a box with wooden Chicago coasters” and “a bottle of bourbon or whiskey.”