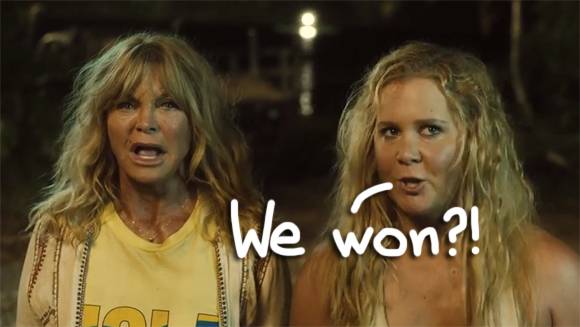 The Mother’s Day weekend box office didn’t do any favors to King Arthur: Legend of the Sword — but it really helped a mom-focused movie turn into a surprise hit!

This weekend at the box office, two big new releases dominated headlines, with Amy Schumer‘s Snatched — in which she costars with the legendary Goldie Hawn — taking the lead in an unexpected turn!

Related: Here Are The Best Movie Soundtracks Of All Time!

Schumer and Hawn’s comedy flick netted a grand total of $17.5 million, which was good enough for first place this week at the box office, but still a disappointing show in its own right considering Schumer’s previous movie — Trainwreck — did $30 million in 2015.

But even though the weekend was slow for that comedy genre, the real story was the HUGE bomb of King Arthur: Legend of the Sword.

The movie cost $175 million to make before marketing, but it opened up as a flop of epic proportions, bringing in just $14.7 million from 3,702 theaters at its opening weekend, making it the first HUGE bomb of the summer season and truly one of the worst openings EVER for a big-budget studio film.

It was a tough weekend all around, with media outlets reporting these last three days as among the slowest Mother’s Day weekends ever for new releases in terms of revenue.

Related: What Critics Had To Say About Snatched!

But still… King Arthur completely bombed, to the point of nearly making history as one of the worst big-budget openers EVER.

What about U, Perezcious readers?! Did you see anything at the box office this weekend??

Let us know in the comments (below)!