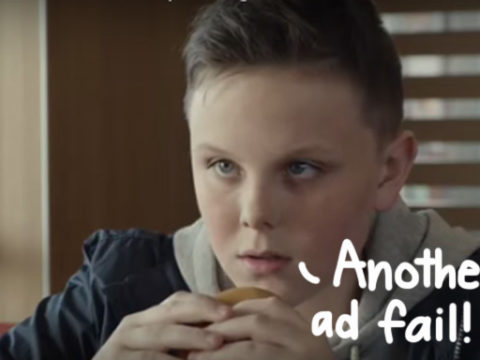 McDonald’s has apologized and removed an ad about a grieving boy, after a barrage of criticism and over a hundred complaints filed to Britain’s Advertising Standards Authority.

People found the commercial, which ran exclusively in the U.K., objectionable because they believed it exploited the child’s grief about his dead father.

“Complainants have objected that it is inappropriate and insensitive to use bereavement and grief to sell fast food. Some complainants have referenced the proximity to Father’s Day. We’re carefully assessing the complaints but no decision has been reached on whether there are grounds to launch an investigation.”

The spot features the boy asking his mother questions about his late dad and realizing they didn’t have a whole lot in common, until that is, the boy orders a Filet-O-Fish sandwich — just like dad used to.

Some people on Twitter complained loudly about the ad:

New #McDonalds advert, cynically using the story of a kid’s dead dad is trashy beyond belief. Who needs 2 parents when you have McNuggets?

I am sickened and disgusted by this advert. Lost my dad at 9. Memories? Yes .Burger? No! Shameful ad #McDonalds

To say all a boy has in common with his dead Dad is stuffing a #McDonalds down his throat is well off the mark. #Advertising #badtaste

That new #McDonalds advert is absolutely shit, nothing in common with his dad but hey liked the same thing on the menu, are they for real ??

Pretty offensive advert espically as I lost my dad 17 years ago. Glad I don’t eat there! #McDonalds pic.twitter.com/dr764NXk3Y

Meanwhile, others thought it was fine:

I actually thought that #McDonalds advert was quite sweet. Surprised to see it has received so many complaints.

the ad is fine #McDonalds. Sheesh. The kid wants to share lunch with his mom and it just so happens he likes the same sammich his dad did.

I thought the #mcdonalds advert was quite well done. Some people just enjoy being perpetually and professionally offended.

Can ppl just stop being so sensitive!That #McDonalds advert didn’t in anyway undermined death,simply what d family used to share!#skynews

Nonetheless, the ad was pulled, and McDonald’s even issued the following statement:

“We can confirm today that we have taken the decision to withdraw our ‘Dad’ TV advert. The advert will be removed from all media, including TV and cinema, completely and permanently this week.

“It was never our intention to cause any upset. We are particularly sorry that the advert may have disappointed those people who are most important to us: our customers.”

Watch the ad and decide for yourself while you can (below)!

Do YOU think it’s offensive???