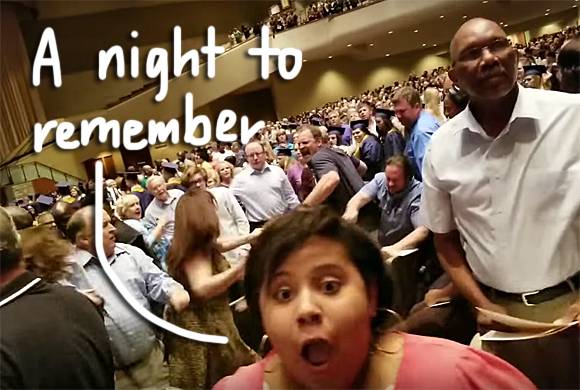 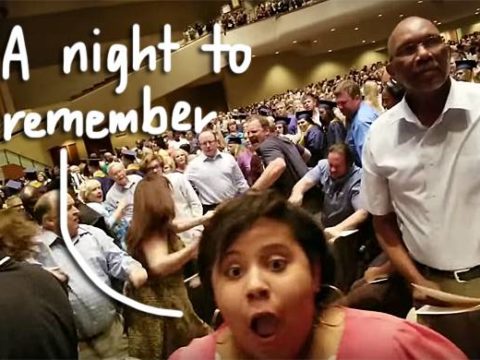 Tennessee high school graduates celebrated the achievement of their minds on Tuesday — and learned just what happens when they don’t use it!

A brawl erupted during the procession of the Arlington High School graduation ceremony, which ended with a woman in handcuffs at Bellevue Baptist Church.

Video footage shows women on opposite ends of a row beginning to argue with each other with several men around them.

After some pushing and shoving, a full on fight broke out as Pomp and Circumstance played in the background. A woman in a gold dress can be seen grabbing another by the hair and throwing punches to her head.

Several audience members had to break up the fight. It’s unclear if anyone was arrested, but the altercation ended with one woman in handcuffs.

So, what sparked the smackdown? A witness told BuzzFeed News the scuffle broke out over a saved seat, claiming:

“They got to fighting over a seat that the woman was saving for somebody else. It was funny for me, but if that was my family I’d be pissed.”

All this drama over a few seats!?

Video: Will Ferrell Serenades USC Graduates With Some Whitney Houston!

Tammy Mason, superintendent of the Arlington Community Schools, called the brawl a “distraction” from an otherwise enlightening ceremony. In a statement released Wednesday, she said:

“Last night we celebrated 500 students who graduated from Arlington High School. This year’s class earned over $30,600,000 in college scholarships. It was unfortunate that a couple of adults in the audience exhibited the behavior they did prior to the ceremony beginning and thus has caused a distraction from the celebration of our students’ accomplishments.”

“Distraction” seems like a bit of an understatement, tbh — we feel bad for the graduates related to the adults involved with this Jerry Springer segment!

Ch-ch-check out the clips (below) to see the fists fly!