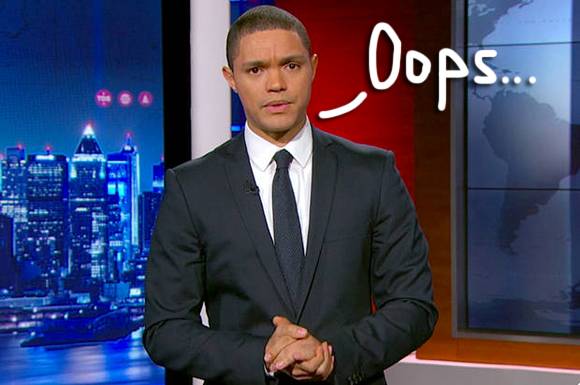 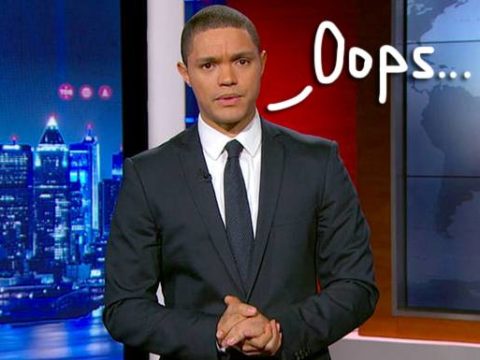 Late night shows are getting edgier and edgier as a result of constantly roasting the Glazed Ham running the White House — but fans aren’t laughing at a recent joke made by The Daily Show!

The Comedy Central show was hit with major backlash on Wednesday over a tweet that was viewed by many as transphobic.

Video: Trump & The Rock Face Off In Jimmy Kimmel’s ‘ElectoMania 2020’!

The show’s Twitter account promptly deleted the faux-poll it shared right after news broke that House Majority Leader suggested that Donald Trump was being paid by Vladimir Putin.

The tweet, screenshot by The NY Daily News, gave silly suggestions for news that would drop on Thursday evening, with the final option being “Donald Trump announces he is now Donna Trump.”

The jab came off as lazy and insulting to the trans community, and unsurprisingly sparked a good amount of social media outrage.

The Daily Show‘s situation, however, is much different; and caused an actual uproar over a joke that legit sounded like it was crafted by Johnny Carson‘s writers in the ‘80s.

Do U agree? See some strong reactions (below)!

@TheDailyShow This was funny until it ended at the expense of a marginalized group. #DroppedTheBall
— Freedom Fighter (@RideOutTheStorm) May 17, 2017

@TheDailyShow Literally the easiest target in the ENTIRE WORLD and you go for a trans joke?
— slugabed (@mymillshake) May 18, 2017

@TheDailyShow It’s using us as a punch line which directly contributes to a climate where other bigots think they can murder us without consequences.
— Christina DiEdoardo (@ChristinaSFLaw) May 18, 2017

@TheDailyShow Haha you’re right daily show. Someone transitioning is definitely as crazy as the other things on this list
— TB Corporate (@trillballins) May 18, 2017

Not learning from backlash Colbert & SNL got for homophobia, @TheDailyShow does transphobic joke on Int’l Day Against Homo-/Trans-/Bi-phobia pic.twitter.com/HFcrxCSuxT
— Melissa (@magmaticmelissa) May 18, 2017

How did it take the Daily Show two hours to delete a transphobic joke straight outta 1993
— Adam H. Johnson (@adamjohnsonNYC) May 18, 2017

So @TheDailyShow on #IDAHOT/#IDAHOBIT shows it doesn’t care about transgender folks & decides to make a transphobic joke about Donald Trump. pic.twitter.com/yNgMcDch3A
— Jessica Kurr (@jkurr) May 18, 2017

@TheDailyShow Amazing feat for neoliberals to make a transphobic “joke” like this ON THE DAY CHELSEA MANNING IS RELEASED & IT IS #IDAHOT #IDAHOBIT.
— Kiran فاطمہ (@KiranOpal) May 18, 2017