Celebrities Latest
Home Celebs This Rat Cafe Is The Quirky New Spot That’s Going To Have... 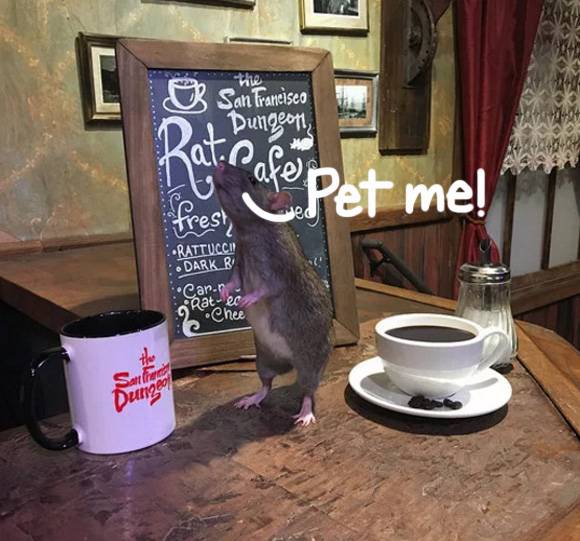 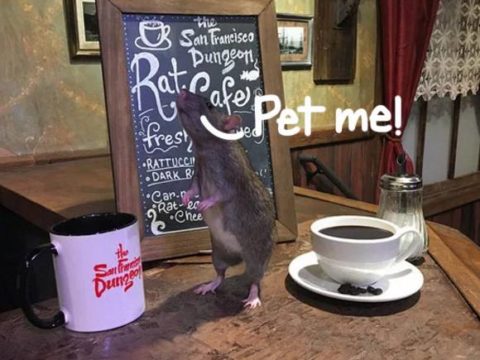 Would you like some sugar, milk, and rats with your coffee???

Your morbid prayers have been answered, you weirdo, because The Black Rat Cafe is totally a thing! Also, are you Wednesday Addams, perchance?

Related: A Model Gets Bitten By A Shark During Underwater Shoot

The San Francisco Dungeon — a “60 minute journey through San Francisco’s past from the Gold Rush to Alcatraz” — is now offering furry entertainment in a pop-up with a bistro setting. Except here you can sip on a latte, or “rat-tuccino” and interact with some domesticated rodents.

And it’s for only $49.99, which will get you unlimited coffee and entrance to the Dungeon. Sounds like a rat-tacular deal to us! LOLz! (That wasn’t even a good pun.)

“We want to offer a frighteningly funny encounter with creepy-crawly critters you could only find at The San Francisco Dungeon. Drinking coffee while a rats on the loose? That’s not for the faint of heart.”

The rats will be provided by Rattie Ratz, which is a non-profit that encourages rat adoption. Clarkson also told Eater that the food served wouldn’t be made anywhere near the rats, saying:

You better, dude! This isn’t Ratatouille!

Some people are NOT feeling it though:

San Francisco’s new Rat Cafe is the animal pop-up no one asked for https://t.co/cofCBlns3v pic.twitter.com/VPWEwtnmbR
— MUNCHIES (@munchies) May 19, 2017

As a rat owner/lover, I personally don’t think this is a good idea. They’ll try to everyone’s food & chew on wires. https://t.co/s9izhYqrUH
— Jessica Lynn (@jesslynnchii) May 19, 2017

While it’s a cute idea, I don’t let my rats run around my kitchen. The cafe will have to deep clean their facility before & after. #ratcafe https://t.co/frt6AWSrs6
— Jessica Lynn (@jesslynnchii) May 19, 2017

Would you want rats all up in your business while you have coffee, Perezcious readers???

Let us know (below)!