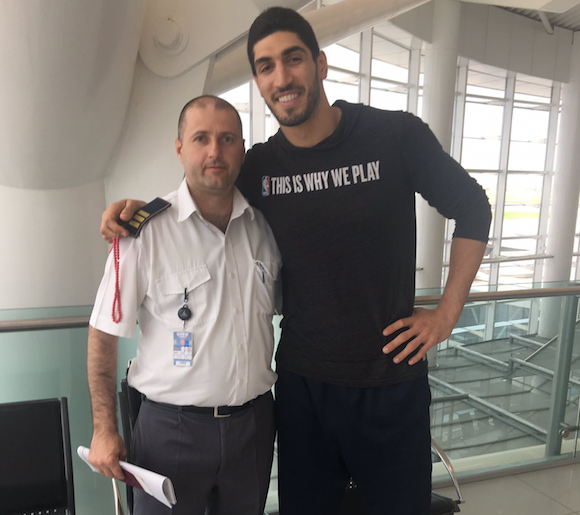 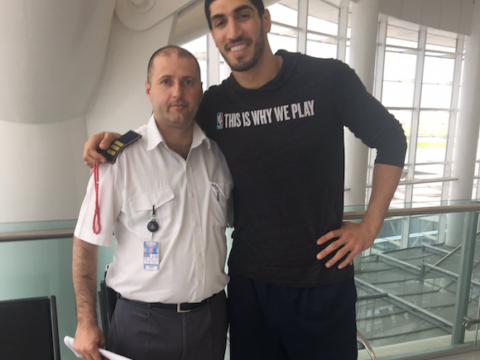 NBA star Enes Kanter, a center for the Oklahoma City Thunder, has apparently been detained in a Romanian airport with his passport taken away because of what appears to be his criticisms of Recep Tayyip Erdoğan, the President of Turkey.

Kanter, who is Turkish, has been a vocal critic of Erdoğan’s authoritarian regime in the country, and when he was trying to fly on Saturday morning through Romania, it appears that the President — or someone in the Turkish government — got to him.

At least, that’s what Kanter thinks.

Here he is describing what happened in a video he posted to Twitter shortly after being detained, on his birthday no less, (below):

Here’s the full tweet from Kanter earlier this morning, in which he also calls Erdoğan the “Hitler of our century”:

And a few hours later, he posted a pic with what were purportedly the two Romanian police officers tasked with monitoring him, too (below):

The Oklahoma City Thunder and the NBA league offices are apparently “gathering information through the appropriate channels,” per reports, and a few hours later, Kanter was released… sort of.

His Turkish passport was completely canceled, and so he couldn’t enter Romania, but he was able to board a flight to London and leave the place behind, according to Fabian Badila, a spokesman for the Romanian border police:

“Today at around 1 p.m. local time an individual arrived from Frankfurt. My colleagues established that his travel documents weren’t valid, that they had been canceled by his home country, so he wasn’t allowed to enter the country. At around 5 p.m., he left the airport on a flight to London. While he was at the airport he wasn’t detained or locked up, he was allowed to wander around, but he couldn’t enter the country.”