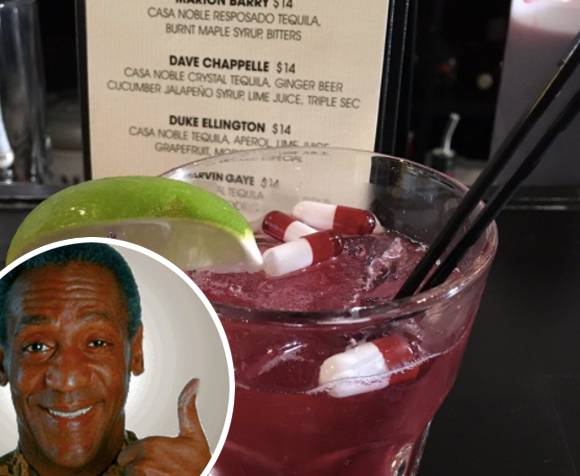 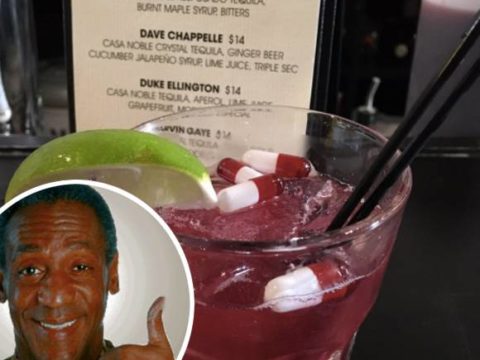 As you can tell by their name, the Washington D.C. bar and restaurant Diet Starts Monday has a cheeky sense of humor about their high calorie fare.

Their logo, which you can buy on shirts, hoodies, and sneakers at the pop-up, even has a skeleton serving a giant burger.

But they should have stopped at joking about how their sandwiches made with bacon-wrapped donuts instead of bread would kill you — because they went too far when it came to their celebrity-inspired cocktails.

Related: Jimmy Fallon Responds To Rumors His Drinking Habits Are Spiraling ‘Out Of Control’!

In addition to drinks named for D.C. celebs like Dave Chappelle and Taraji P. Henson (as well as disgraced mayor Marion Barry), they also introduced one named after Bill Cosby. Yeah.

And as if it weren’t in bad taste enough to name a drink after the man accused of raping women after drugging their beverages, it was called the “Pill Cosby” and was garnished with big fake capsules (above).

Co-founder Davin Gentry told the Washingtonian that it was meant to be an awareness-raising commentary about rape culture, saying:

“It lets people be a little more aware.”

You’re telling us your intentions are as pure as the Casa Noble Crystal tequila? Sorry, but frankly that’s a hard pill to swallow.

This just looks to us like a joke meant to cause controversy to get attention. You know. Trolling.

Related: Tomi Lahren’s Tweet About ‘Holding A Job’ Is Hilariously Timed With Her Lame New Gig

This drink was not made with any intent to offend anyone, especially not victims of rape. We take full responsibility.
— Diet Starts Monday (@dietstartsmon__) May 22, 2017

The drink has since been removed from the menu and we apologize to anyone who felt offended by this.
— Diet Starts Monday (@dietstartsmon__) May 22, 2017

They even deleted their apology tweets after the fact!

Looks like the attention they got is NOT the kind they wanted.

Restaurant Apologizes For Adding ‘Pill Cosby’ Cocktail To The Menu — And Their Defense Is So Lame!