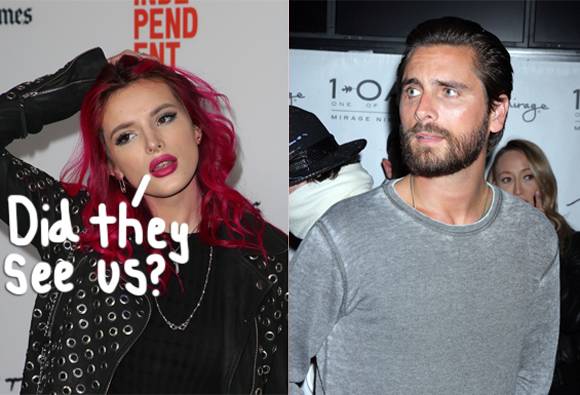 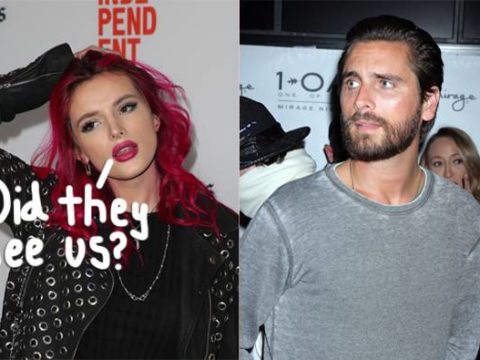 Looks like the rumors are true — Bella Thorne has had a change of heart about Scott Disick.

In case you forgot, the former Disney darling and Kourtney Kardashian‘s baby daddy had quite the whirlwind romance at the end of May. However, after a disastrous trip to Cannes, Miz Thorne pulled the plug on their romance as she wasn’t down with Lord Disick’s “hardcore” partying.

Nonetheless, the father-of-three has weaseled his way back into the 19-year-old’s life. Not only has the It-girl been hanging out at Scott’s house and receiving flowers from the KUWTK celeb, but the duo have once again started hitting up hotspots in El Lay together.

On Thursday evening, the Famous In Love actress and the 34-year-old were spotted walking arm-in-arm as they left Lana Del Rey‘s party at the 1OAK in West Hollywood, CA. And it sounds like the twosome’s public outing caused the paparazzi to lose their minds as one eyewitness reported on Twitter:

We bet. It’s said Bella attempted to hide herself from the paps as she climbed into the backseat of a car alongside Disick. And there is no denying that these two are an item again as she pretty much confirmed the news on Snapchat. After planting a kiss on the TV starlet, a male friend dished on camera:

“Fuck it. I hope Scott doesn’t kill me.”

Hopefully, this time around, Disick keeps his partying in check to make things last with Thorne. *Sigh*

Related: Kourt & Scott Are ‘Currently Not Speaking’ After Cannes Bender!

Nonetheless, Kourt’s ex wasn’t the only E! star to hit up the 1OAK on Thursday evening as his (kind of) sister-in-law Kylie Jenner made an appearance at the bash with a male companion. Miz Jenner was also feeling camera-shy as shielded her face (below) as she got out of her burnt orange Lamborghini.

Actually @KylieJenner just pulled up in a Lamborghini to get shot by paps. pic.twitter.com/BE3g9kok2i
— Stalker Sarah (@SarahMOnline) June 23, 2017

Perhaps King Kylie wasn’t up for the paparazzi’s antics as she was too busy missing some unnamed person online. The reality TV star took to Instagram and cryptically posted:

In short: these celebs have got to get their dating drama under CONTROL! *Snap, Snap!*

Bella Thorne & Scott Disick Confirm Their Romantic Reunion With A Night Out On The Town!