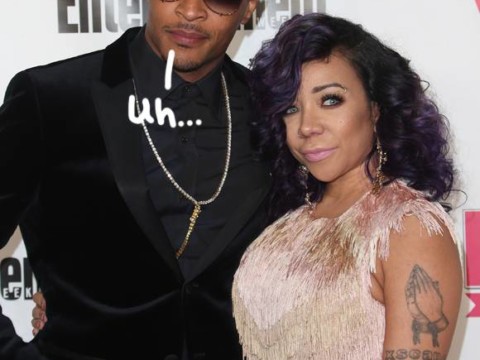 On Friday, Tameka “Tiny” Harris celebrated her 42nd birthday where ex T.I. gave her a shoutout on Instagram.

As we reported, the Xscape band member filed for divorce from the rapper in late 2016, though there are reports they may call the split off.

In the Insta post, the What You Know musician praises his baby momma for being by his side, particularly through his infidelity and jail time in both 2009 (for federal weapons charges) and 2010 (for violating his probation).

Happy Gday to my beautiful lovely lil loud mouth,argumentative know it all,shit kickin,Cap ass Southside Patna. @majorgirl As a couple We’ve experienced some of the greatest moments in our lives together & burnt a hole in a bunch of big bags of money,in some of the most beautiful places in the world. And while I may have fucked up & still have so many more fuck ups in me on so many levels,one thing that’s never gon change is how I consider you…. You are,have been,& always will be one of the Best Friends I have in the world. We’ve done just about all there is to do,good & bad. I remember for a long time we couldn’t even spend a day apart from one another we were so emotionally connected. Then we were forced to “do time” apart back to back.(That shit sucked huh?) Then we popped back up on they ass and showed the world how cool raising kids could be on Family Hustle. While that may have put a few million more people than we’d like in our personal intimate business,it also became an example for so many who didn’t have one in the areas of parenting,family & marriage in HipHop…. That’s some real stand up shit to be proud of. We have 7 amazing kids who all have enough skills,smarts,talent and ability to take care of us in our old age….Now That’s awesome!!! And while most of these nosey, no business havin,overly-opinionated,fake caring ass people would see it as a break up… I see it differently. In my eyes,we didn’t break up,we EVOLVED into something unconditional. A relationship that supersedes fidelity,physical presence,or any other disagreement we may have faced. What we have is stronger than the bullshit & for that I’m thankful. We’ve taught each other things that’ll allow us to continue to raise hell & kick shit for many many moons. Keep pressing your line & polishing your shine Mrs.H… Enjoy this day that’s a celebration of the day the lord gave US You!!! Kick Big Shit Fa That!!!! With Eternal Love Respect & Admiration, ?Tip?BIG Daddy?King Sr?Mr Harris. #HappyBirthdayMrsHA post shared by TIP (@troubleman31) on Jul 14, 2017 at 9:17am PDT

However, one Twitter user is calling BS on TIP’s public letter. Immediately after he posted the birthday message, Brandy-Tennille went on a rant calling T.I. out for mistreating Tiny for all these years. She exclaimed:

One of these days, a woman’s worth to a man won’t be appraised by the amount of hell she’s willing to go through with him.

So as opposed to just…idk being a better man, you reward her with a forehead kiss for staying with you through jail and mistresses?
— Brandy-Tennille (@BtSquared2) July 14, 2017

The theme is always the same: “you’re so great to me and I don’t deserve you because I’m a piece of shit, but thanks for sticking around.”
— Brandy-Tennille (@BtSquared2) July 14, 2017

Because you know what?? Once you leave…you’ll see how parasitic he was. And he’ll realize how he had the bitch he’s been chasing all along
— Brandy-Tennille (@BtSquared2) July 14, 2017

And it’ll be too fucking late. And it won’t matter to you. Because you’re that bitch. Always has been. Never fucking forget it, either.
— Brandy-Tennille (@BtSquared2) July 14, 2017

It takes some time and some patience, but believe me, you’ll get there. But shit like this, my love? No. Never ever. This ain’t okay.
— Brandy-Tennille (@BtSquared2) July 14, 2017