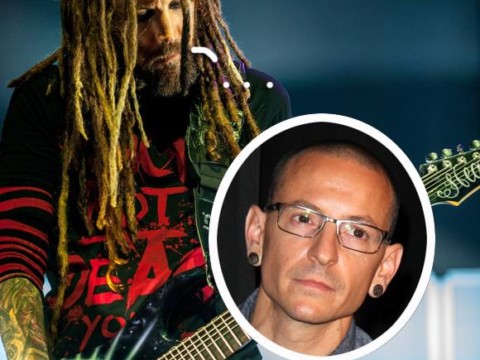 It’s hardly been 24 hours since it was revealed Chester Bennington seemingly committed suicide.

While many stars paid tribute to the late Linkin Park frontman on social media, Korn guitarist Brian “Head” Welch instead criticized the singer for taking the “cowardly way out.”

Fans were shocked to read his insensitive remarks so soon after his friend’s passing, and slammed him for doing so!

“It is always disappointing to me when I see people freak out and call suicide “cowardly” or compare their experience to someone’s else’s. Calling it ‘cowardly’ shows a lack of empathy, understanding and love. Be pissed.. be hurt.. just don’t judge and shame someone else’s position when they took their leave.”

“Wow. Expected more from someone who has battled depression. Not cowardly at all. At that particular moment they felt it was the ONLY way. Sad statement, hoping you amend it.”

Some did agree with the musician, like this commenter:

“Well said Brian well said. It is pissing me off as well why didn’t he reach out for help? Why did no one notice he was having problems? Yes it is tragic and my heart breaks for his family and friends and all his fans me being one of those fans but it didn’t need to happen it shouldn’t have happened. So many things coud [sic] have been done.”

It sounds like Brian took note of the polarizing reactions as he further tried to explain:

Late Thursday night, the Korn star also filmed a video to share he’s “grieving” over the death of his friend:

He didn’t apologize for voicing his opinions, but he did share a glimpse into some of his raw feelings.

We doubt Chester’s family would appreciate how he described his “old friend” though, as he’s not the only one mourning the singer’s death.

Our thoughts and prayers continue to be with the late 41-year-old’s loved ones.