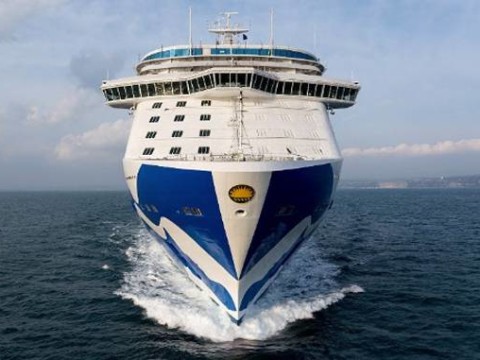 On Thursday, it was revealed that a man, named Kenneth Manzanares, has been arrested and charged with murder following his wife Kristy Manzanares‘ death aboard a Princess Cruises ship in Alaska. According to the cruise line, a domestic dispute took place on Tuesday which resulted in the passing of 39-year-old Manzanares.

The FBI took control of the investigation as Kristy’s death is certainly a “suspicious” one. Not to mention, the agency has jurisdiction as the crime was committed on open water. In an affidavit by FBI Special Agent Michael Watson, it’s said that security and medical personnel “responded to an incident” at the Manzanareses’ cabin just after 9 p.m. on July 25.

Reportedly, Kristy was discovered with a severe head wound and blood was also seen spattered throughout their cabin. It didn’t take long for the FBI to be notified about the incident. So… what happened?

It was an Emerald Princess security guard who noticed that Kenneth’s hands and clothing were covered in blood. The officer moved swiftly as he detained Kenneth by placing him in handcuffs and locking him in an adjoining room. To make matters worse, other witnesses claim Kenneth defended his actions by revealing that his wife “would not stop laughing at [him].”

What kind of backwards bullshit is that??

According to U.S. Attorney for Alaska Bryan Schroder, Manzanares acted oddly after the outburst as he grabbed his wife’s body and dragged her toward the cabin’s balcony. An eyewitness stated that Kenneth eventually brought Kristy back inside.

On these particular actions, Schroder noted:

“We don’t know what he intended to do once he got her out there.”

Sounds like murder to us. We’re sure Kristy’s family members, who were also on the cruise ship at the time of the murder, are eager to have justice.

Princess Cruises has released the following on the tragedy:

“Our thoughts and prayers are with the family and all those impacted by this tragic event.”

We couldn’t have said it better ourselves. R.I.P., Kristy.

In Another Awful Case Of Male Fragility, Man Kills Wife On Cruise Ship Because She ‘Would Not Stop Laughing’ At Him