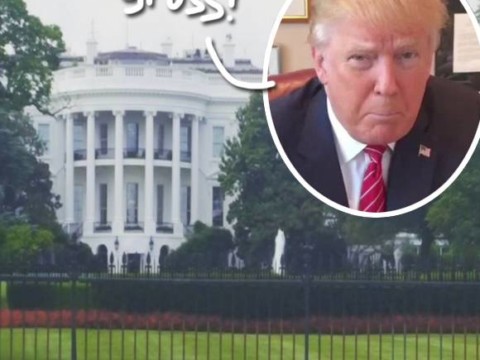 Just when you think Donald Trump couldn’t get more undignified…

In an article appearing in August’s Sports Illustrated (about, of all things, golf), Trump is quoted as making one of his most classless statements yet.

The POTUS is well known for how much time he spends golfing. *cough*HYPOCRITE*cough* In fact, he’s already visited his favorite club Bedminster FOUR TIMES in his six months in office.

Related: Trump Apparently Doesn’t Even Follow The Rules While Golfing!

He even has his own cottage on the grounds, which, as he reportedly told a group at the course recently, he prefers staying in because:

“That White House is a real dump.”

Your president, ladies and gentlemen.

He later went on to say, “They don’t even have golden toilets. It’s terrible. They got me shitting on porcelain! Like some kind of loser! Sad!” Then he bragged about beating the liberal elites and fired a groundskeeper in front of the crowd for some light pre-dinner entertainment.

OK, that last part in italics we just made up as a joke (he likes jokes), but the first quote is real, and isn’t that enough?? We mean, he seriously called the White House a dump.

Maybe just get the fuck out then?? Just a thought.

See some pics taken inside the historic “dump” (above) and prepare to get even more annoyed! The entire article is available now on Golf.com if you can stomach it.