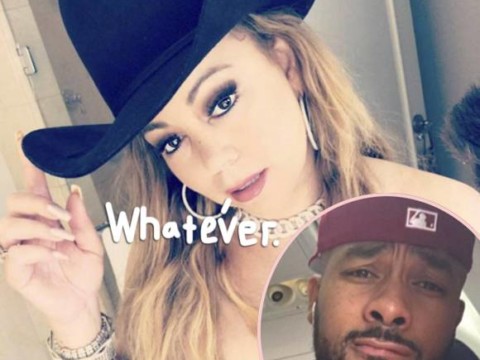 Has Mariah Carey just run out of fucks to give??

After MANY lackluster performances surfaced online, it’s safe to say MiMi is phoning in her concerts these days. Now, don’t get us wrong, we know that Miz Carey has never been a dancer — but she seems particularly underwhelmed with her work lately.

Thankfully, Mariah’s former choreographer Anthony Burrell has since given his insight into the decline of the diva’s onstage skills. During a candid chat with Complex, Burrell explained:

“It’s just typical Mariah. Mariah is clear: when she doesn’t wanna do something, she doesn’t do it. She’s performing with lackluster and no fucks given, and it’s taking away her star.”​

“Working with an artist like Mariah, who’s not a mover first, it’s always a challenge to get them to think physically and not just vocally. You always have to keep in mind that they’re a singer first. The priority is not teaching them 100 counts of 8, or endless routines. I wanted to give Mariah a modern push to revamp her, give her a fresher, more modern feel, make her more aware of her body and her lines, and not look like her feet hurt when she’s walking.”

Whoa. You’d think after 27 years in the industry Mariah would be able to saunter around onstage without looking at her feet.

Obviously, Mariah’s diva nature plays a big factor into the effort she exhibits during a concert. Anthony quipped:

“You’re a legend. But you don’t care, your team doesn’t care. They’re not guiding and directing her. She’s back to where she was before. It’s not like she’s never looked this bad before; I just stepped her game up.”

If Anthony seems salty AF, that’s because he is. As you may recall, the choreographer was fired after Mariah’s disastrous New Year’s Eve performance. On what it’s like to work for the chart topper and her team, the renowned dancer dished:

“It felt like they were so new at their jobs, and had no direction. When you’re green, you’re playing things by trial and error, and there were a lot of errors. I was very vocal about things that weren’t right. When you try to take a shortcut and you don’t know the clues, you’re bound to get fucked up or screwed, because you don’t have the experience of running a tour or a billion-dollar empire. Some of the dancers her team hired are great dancers, but they’re not choreographers or creative directors.”

Although, at the end of the day, Anthony still believes Mariah is a “world-class artist” and “a great person to work with.” Translation: He’s terrified of Mariah’s wrath. LOLz!