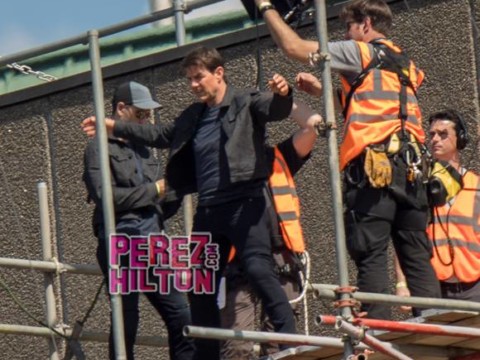 It appears that Tom Cruise was injured during stunt work while filming for Mission: Impossible 6 this week.

According to video from London obtained by TMZ, Cruise was doing his own stunts jumping from building to building when, at one point, he jumped to a mark and fell short.

The video appears to show Cruise hitting the building hard, and then limping away tenderly after getting back on his feet.

The extent of his injuries are unclear at this time.

Fortunately, it’s being reported that he was able to return, where he finally jumped to his original mark and apparently finished filming the scene.

Here he is, making the jump in another photo taken on the scene while they were filming (below):

The 55-year-old actor is well known for doing quite a few of his own stunts, including some notable moments in his past involving pretty scary situations.

Hopefully everything is OK this time around!

Stunt work is not for the faint of heart…