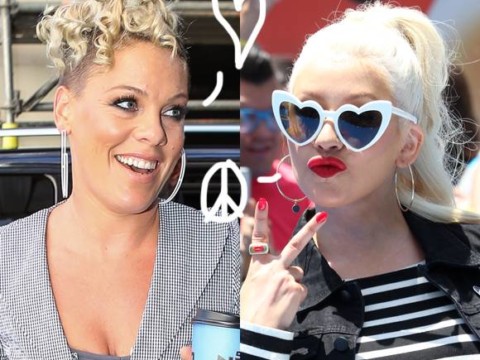 Yass! We may obsess as much as anyone over a good celeb feud, but ultimately the best endings are the happy ones.

That’s the case for Pink and Christina Aguilera, who have been on bad terms ever since a conflict over who would sing which part on their 2001 hit, Lady Marmalade.

Video: Pink Makes An Emotional Statement With Her Music Video For What About Us

Now Pink is saying the two have “made amends” and even says she ❤️’s Xtina!

It all started when some troll dissed her upcoming MTV VMAs Video Vanguard Award with a reference to the troublemaking Moulin Rouge collab — and made the mistake of @ing her:

Music brings us all together. The best part of music is- there’s room for everyone to win at the same time. Don’t be what’s wrong w/da world
— P!nk (@Pink) August 15, 2017

OK, all of that is so savage and so fair — but the best part is the love for Xtina!

We’re so glad these two could find peace!