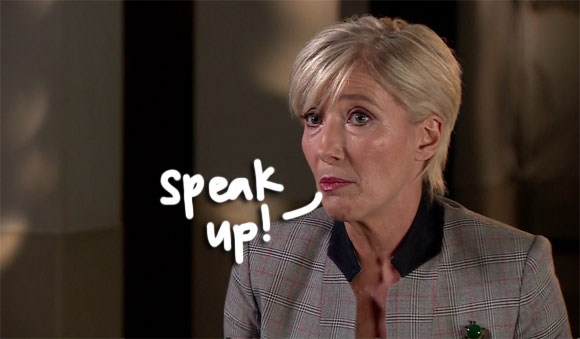 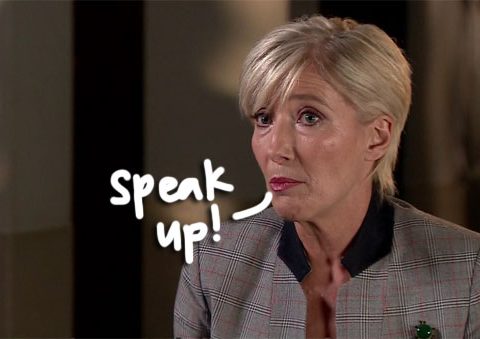 “Open your eyes, and open your mouths and say something.”

That was queen Emma Thompson‘s message to men and women in a new interview on BBC Newsnight that aired on Thursday following bombshell reports outing Hollywood big wig Harvey Weinstein as a serial sexual assaulter.

Topple the patriarchy, Em! We’re right there with you!

Related: Was TIME Magazine Wrong To Put Harvey On Their New Cover??

The Oscar winner slammed the filmmaker’s gross behavior — and emphasized that he’s definitely not the only male exec in the industry abusing his position of power.

“I didn’t know about these things, but they don’t surprise me at all, and they’re endemic to the system. What I find sort of extraordinary is that this man is at the top of a very particular iceberg, you know he’s — I don’t think you can describe him as a ‘sex addict,’ he’s a predator. But what he’s, as it were, at the top of the ladder of is a system of harassment, and belittling, and bullying, and interference, and what my mother would have referred to in the old days as ‘pestering.’ ‘Is he pestering you?’ That’s the word we used to use in the olden days, if you recall. This has been part of our world, women’s world, since time immemorial. So what we need to start talking about is the crisis in masculinity, the crisis of extreme masculinity, which is this sort of behavior, and the fact that it is not only OK, but it also is represented by the most powerful man in the world at the moment.”

When asked if she thinks there are other men like Harvey out there, Emma replied “of course, many,” without hesitation:

She even added her own experience with harassment as she “spent my twenties trying to get old men’s tongues out of my mouth.” Ugh!!

Sad, but unfortunately the reality for so many women.

Watch her insightful interview (below)!

Emma Thompson tells us the Harvey Weinstein allegations are just the tip of the iceberg of a wider and systemic problem in Hollywood pic.twitter.com/VDxswrUP5Z
— BBC Newsnight (@BBCNewsnight) October 12, 2017

“I spent my twenties trying to get old men’s tongues out of my mouth” – Emma Thompson on being a woman in Hollywood pic.twitter.com/5A52R3tC11
— BBC Newsnight (@BBCNewsnight) October 12, 2017

Ryan Reynolds Reveals He Once Saved His Nephew’s Life While Encouraging Fans To Take...