Celebrities Latest
Home Aaron Carter Dancing With The Stars’ Disney Week Was Magical For Some — But... 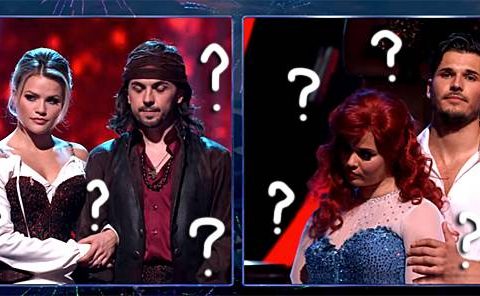 Who doesn’t love Disney week on Dancing With The Stars??

The upbeat theme was certainly a pleasant change following last week’s emotional “most memorable year” numbers. While many celebs brought their A-game for the House Of Mouse theme — hint one couple got a perfect score — others struggled to improve their dancing skills.

Thus, it wasn’t surprising when another couple was eliminated from the competition. Although the losing pair should remember, even if they danced perfectly, SOMEONE had to go home this week.

Be sure to ch-ch-check out all of the HIGHlights from Monday night’s episode (below)!

Jordan Fisher and Lindsay Arnold nabbed the first perfect score of the season thanks to their Moana-inspired foxtrot. BRAVO!!

After having an emotional routine last week, it was nice to see Frankie Muniz having fun with his SEXY Pirates Of The Caribbean themed Argentine tango. The judges loved it as much as we did as they granted Muniz and his partner, Witney Carson a 29/30.

Lindsey Stirling and Mark Ballas landed just behind Muniz and Carson with a score of 28/30 as they REALLY nailed their Pinocchio foxtrot.

Val Chmerkovskiy and Victoria Arlen did well on Monday evening too as they performed a playful jazz routine inspired by Steamboat Willie. They were given a score of 27/30.

Nikki Bella and Artem Chigvintsev also locked in a score of 27/30 thanks to their Coco jazz number. LOVES it.

Drew Scott and Emma Slater landed right in the middle thanks to their The Muppet Movie routine. They received a 25/30 for their work.

Terrell Owens and Cheryl Burke‘s Lion King quickstep kept them safe for another week as they too scored a 25/30. Good job!

Vanessa Lachey and Maksim Chmerkovskiy didn’t really bring the magic as they only got a 24/30 for their Snow White performance.

Sasha Pieterse and Gleb Savchenko tied with Vanessa and Maks as they too nabbed a 24/30. Although the twosome’s Little Mermaid rumba was “well crafted routine,” it didn’t steal the show.

Nick Lachey and Peta Murgatroyd landed at the bottom yet again as their Jungle Book number garnered only a 22/30. Yikes.

As the Pretty Little Liars alum revealed that she lost 37 pounds thanks to her DWTS experience, we think she’s still walking away a winner. Congrats, girl!!

Dancing With The Stars’ Disney Week Was Magical For Some — But Not Everyone! Recap HERE!