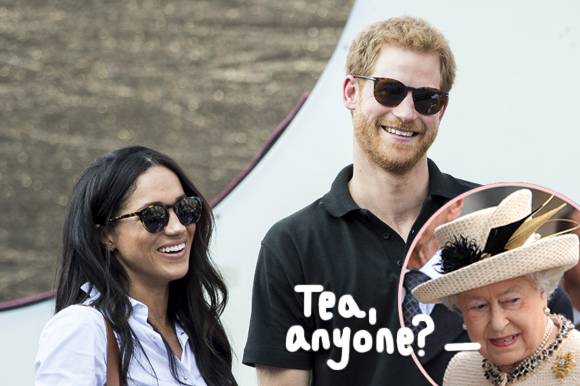 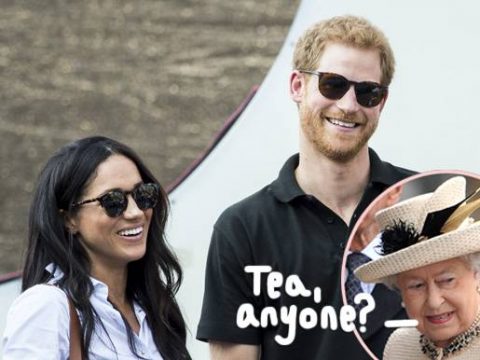 A royal engagement is nigh, right??

On Wednesday, it was reported that Prince Harry brought Meghan Markle to Buckingham Palace last week for a two-on-one visit with Queen Elizabeth. Ooh, go on!!

QUIZ: Are You A Royal Family Expert??

According to Daily Mail, the love birds stopped by the British sovereign’s London palace for a private tea with the Queen. It’s said the twosome, who have been dating for at least 15 months, arrived at the royal residence in a Ford Galaxy station wagon with blacked out windows. Clearly, Meghan and Harry are trying to keep a low profile.

Per the report’s columnist Richard Kay, upon their arrival, Meghan and Harry were “whisked up to the Queen’s private sitting room” for an hour visit. That’s some serious face time, girl!! Although, there are reports that claim Elizabeth and Meghan met during a visit earlier this year to Balmoral Castle in Scotland.

Later in the evening, Harry performed some royal duties as he accepted a posthumous award on behalf of his late mother, Princess Diana. The prize at the Attitude magazine awards was to commemorate the late princess’ HIV/AIDS activism. We’re sure Harry’s mother would be so proud of everything he’s accomplished — especially his mature relationship with Meghan.

Now, obviously, there’s major significance to the Suits actress’ sit down with the Queen. Currently, Harry is fifth in line to the throne, which means he needs the Queen’s permission to tie the knot. The ginger prince will be pushed to sixth in line when Kate Middleton gives birth to her third child with Prince William!

Regardless, locking in his grandmother’s approval isn’t expected to be a problem, as the Queen simply “adores” Harry. One insider previously noted:

“If Harry asks for something, she would say yes as she adores him.”

All signs are pointing to an engagement as, in addition to this visit, Harry and Meghan made their public debut as a couple last month at the Invictus Games in Toronto. At the event, Harry spent some SERIOUS quality time with Markle’s momma, Doria. Not to mention, spokespeople for Kensington Palace and Buckingham Palace both declined to comment on the report. Now, isn’t that VERY suspicious???

Honestly, we’re just SO ready for these two to be engaged already!!!