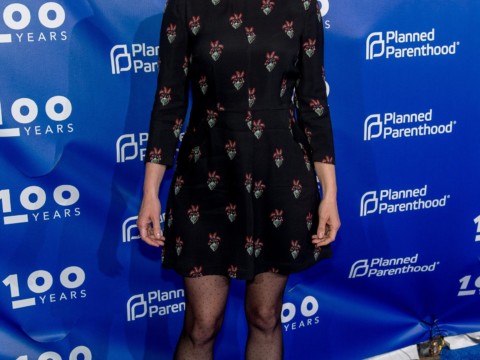 An array of celebrities — from Meryl Streep to Tina Fey to Scarlett Johansson to Julianne Moore to Chelsea Handler — turned out to support Planned Parenthood at its centennial celebration, and to hear Hillary Clinton urge continued activism on behalf of women and girls around the world, and access to services like pregnancy and maternity care.

Advancing women’s rights and opportunities, Clinton said at the event Tuesday evening — during which she received an award — “remains the great unfinished business of the 21st century. And some days, it seems like it may be even more unfinished than we’d hoped.”

“As we speak,” Clinton said, “politicians in Washington are still doing everything they can to roll back the rights and progress we’ve fought so hard for over the last century. I mean, could you believe those photos of men around that conference table deciding how to strip away coverage for pregnancy and maternity care?”

Clinton, the former Democratic nominee, criticized Republicans for trying to force through a health care plan “that would cost 24 million people their health insurance and would gut funding for Planned Parenthood.”

Also honored Tuesday was Shonda Rhimes, the writer and producer of “Grey’s Anatomy,” ”Scandal” and other shows. She was introduced by Streep, who said Rhimes, through her characters, had changed the way Americans look at women.

WATCH: Shonda Rhimes Reflects On Her Rise As A Hollywood Power Player (Exclusive)

Clinton, too, praised Rhimes for “putting strong, empowered women at the center of her stories for a long time.”

“One of these days, Shonda,” she quipped, “the world may even catch up with you.”

Clinton, who has been making increasing public forays as of late, told the crowd with a smile that she highly recommended long walks in the woods — a reference to when she was photographed doing just that after the election. “It’s far better than screaming at the television,” she said.

And she shared her new motto: “Resist, insist, persist, enlist.”