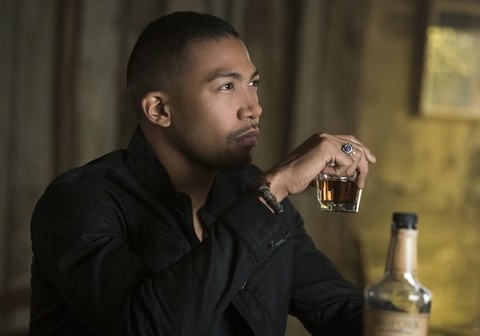 Elijah Mikaelson has Marcel trapped in a spelled circle in a dungeon on “The Originals,” and the recent plot twist allowed Charles Michael Davis more time to prepare for his directing debut.

The actor, who plays super-powered vampire Marcel, was able to use his lighter schedule in the previous episode to prepare to shoot “High Water and a Devil’s Daughter,” which airs this Friday night on The CW.

“I actually shot the first scene, first up for that episode, and then I was done. Easiest gig. And then they gave me that time to prepare,” Charles told AccessHollywood.com.

PHOTOS: ‘The Originals’: Scenes From Season 4

This Friday, another vessel of the Hollow is back in New Orleans seeking out the pieces (like the jaw bone Haley found in her parents’ storage unit) that will make it whole again.

“The Hollow is trying to work its way back into the real world to be material, so it needs its bones to be collected,” Charles said. “So, The Hollow, right now, has sort of been hiring out people, like Dominic. … And I think The Hollow is realizing that if you want to get something done, you’ve got to do it yourself, so The Hollow’s going to try to be made material.”

To help craft this week’s supernatural scenes the way he envisioned them, as well as other elements of Friday’s show, Charles hit the web to get examples of the type of thing he was aiming to capture.

“And then when it came to costumes, I would jump on Pinterest, and I would have to look up fashion. And we also had some cast members that were teenage girls and I go, ‘Well, what does a teenage girl even dress like? What are they into?’ I don’t know. So that’s a different kind of preparation and research. For all of them, I just needed to be as specific as possible so I could communicate [with the team],” he added.

READ: ‘The Originals’ S4: Charles Michael Davis On What’s Next For Marcel

Charles said having a creative director on set for the scenes he was in (there’s at least one Marcel/Hope scene judging by the trailer) helped make his job a little easier.

“In the preparation, there were a few scenes that I didn’t worry about what was going to happen acting-wise — like, the crafting. One of them was my scenes because I knew that I could adjust — I should say that I knew it was going to go smoothly and perfectly. We have another director on set — a creative director — and she would say, ‘I have a suggestion, and I would turn into actor [mode] and I would say, ‘Yeah, yeah, yeah. … I need something,’ and she’d make a suggestion.”

And, directing his usual scene partners, like Yusuf Gatewood, who plays Vincent, and Daniel Gillies, who plays Elijah, also took some weight off the new director’s shoulders.

“I told Carina [Adly MacKenzie, who wrote the episode with Celeste Vasquez], I said, ‘This is really strange, but I don’t have anything for them. Like in my mind … it’s just blank. … It’s literally blank. I just trust them. I know they’re going to bring in something so my mind doesn’t even bother to imagine it,'” Charles said.

“There were a lot of things that I was looking to layer,” Charles said when asked about approaching the Klaus/Hope scenes. “For me, I’m always conscious of blocking and touching and how people communicate and so I’m a big fan of hands. So I feature a lot of hands. And so, it’ll be like, ‘Hope reaches down for something,’ so you see this [in the] shot where she grabs [something]. And … it’ll say, ‘Klaus holds out his hand for Hope.’ So they clasp hands and there are a lot of other hands. But, I love that because it shows a connection between two people and there’s nothing that gets me more than a father walking hand-in-hand with his little girl. There’s just something about that. So, I use a lot of sort of body language and levels, too. She’s shorter, so, you know, Joe was great — this was Joe’s idea — he just crouched down to be on the same level and they were eye-to-eye and then he stood up and he held his hand out for her, and it was nice because she reaches for it and jumps up and they go walking out together. It was a beautiful relationship.”