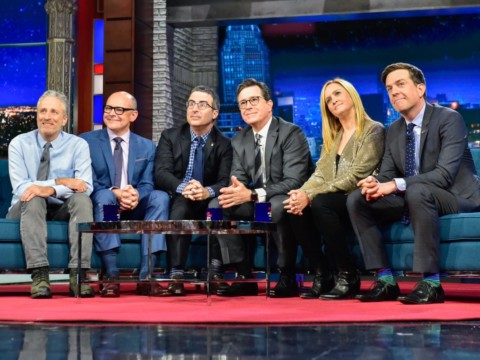 It was a rare TV reunion Tuesday as Stephen Colbert played host to a gang of fellow “Daily Show” alums on a special edition of CBS’ “The Late Show.”

Along with Jon Stewart, former longtime anchor of the Comedy Central fake newscast, Colbert welcomed Samantha Bee, John Oliver, Ed Helms and Rob Corddry, all of whom, like Colbert, sharpened their satirical skills and won fans as “Daily Show” correspondents before heading out on their own.

A comic sketch flashed back to spoof Colbert’s departure from “The Daily Show” in 2005.

“I can’t believe you’re leaving right in the middle of the George W. Bush administration,” Bee told him. “There’s never gonna be another president this good for comedy. This guy does something ridiculous like at least ONCE every MONTH!”

“We’re a family,” said Stewart, pretending to choke up, “but I guess I’m realizing that you’ll all spread your wings and leave me.”

Later, during his guest spot, Stewart told Colbert, “I’ve been reading about you.” Referring to Colbert’s attention-grabbing joke last week at the expense of President Donald Trump, he said, “You have a potty mouth.”

Growing serious, Stewart told Colbert, “The things that you say, even if they’re crass, even if they in some ways are not respectful enough to the office of the presidency, can insult. But HE can injure. For the life of me, I do not understand why in this country we try and hold comedians to a standard we do not hold our leaders to.”

Stewart, who left “The Daily Show” in 2015, said he misses that platform.

Later, Colbert gathered all of his guests to chat in a semicircle of chairs.

“This arrangement we have right now,” he said, “is exactly something we would have made fun of on ‘The Daily Show’: It looks like a morning show.”

Currently, Stewart is developing a project for HBO, where Oliver hosts “Last Week Tonight.” Bee hosts “Full Frontal” on TBS. Helms scored with “The Hangover” and its sequels and “The Office.” Corddry created and starred in the comedy series “Childrens Hospital.”