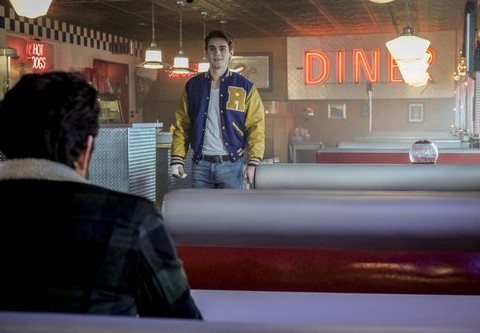 Turns out the answer to “Who killed Jason Blossom?” was not the biggest shocker “Riverdale” had in store during Season 1.

Spoiler alert: We’re deep-diving into the finale in this Q&A with Executive Producer Roberto Aguirre-Sacasa, so watch first and bookmark the link to come back to later.

Thursday night’s finale had a host of game-changing moments for the residents of Riverdale.

To recap, in the closing moments of the finale, Archie emerged from washing his hands in the restroom at Pop’s to see a masked man waving a gun. Not long after, a gunshot went off and Archie was on the floor of the diner, holding his dad in his arms as Fred Andrews was bleeding profusely. The incident happened after an episode-long attempt by Hermione Lodge to get Fred to sell his stake in the drive-in job to the Lodges, or get Veronica to manipulate Archie into getting Fred to sell (V said no way!).

Over on the other end of town, Cheryl Blossom nearly died after falling into an icy river, after going to Sweetwater River to commit suicide. Thankfully, Archie busted a hole in the ice and saved her. And a new Cheryl emerged at the end of the episode when she torched Thorn Hill in front of her mother, Penelope Blossom, as a sort of cleansing.

WATCH: ‘Riverdale’s’ Madelaine Petsch On When The Cast Found Out Who Killed Jason Blossom

The episode also saw Betty learn that her mother, Alice Cooper, got pregnant in high school and gave birth to a son — a son she gave up for adoption who is now in his mid-20s.

There were lighter moments too, like when Betty finally learned about Archie and Veronica’s romance (she was cool with it).

Things got steamy for Archie and Veronica in the finale, and Betty and Jughead exchanged “I love yous.” But, not long after saying those three words, Betty watched from inside the trailer as the Southside Serpents told Juggy they would be looking out for him since his dad, FP, refused to name names to the police, and they gave him one of their jackets, which he put on.

With some time to wait before Season 2, AccessHollywood.com turned to Executive Producer Roberto Aguirre-Sacasa to unpack some of the developments in the finale.

AccessHollywood.com: Is Fred dead? He was moving his mouth at the end of the episode.

Roberto Aguirre-Sacasa: I can’t say for sure. I will say that it looked like he had lost a lot of blood and I [can] say though, we do see Fred in the season premiere of Season 2. We do see him.

Access: Hermione was fairly shady throughout that whole episode. We saw a different Hermione than we were used to seeing. Did she know something like that was coming?
Roberto: Wow. That’s a really interesting question. Hermione did become a shady character. The thought of Hermione being so shady she might have had knowledge of Fred being attacked is so dark and shady. I’m going to say that that’s something we’re going to explore in Season 2 and, many people will be wondering the same exact thing as you. Many people will be thinking that.

Access: I mean, we know Hiram is coming in, so that’s obviously – that’s where our thoughts are going.
Roberto: And, you know, Mark [Consuelos, who will play Hiram Lodge in Season 2] is so charismatic and so sexy and handsome and great, I really want to think of Hiram [and] Hermione as kind of Frank and Claire Underwood from ‘House of Cards,’ kind of working together and you’re terrified of what they might do together.

Access: … So, Cheryl clearly needs some professional help. Is that something you’re planning to explore? She obviously tried to kill herself and then she burnt a house. So–
Roberto: Yeah, the idea of Cheryl in therapy is quite provocative. I mean, she’s also the kind of character who — she was sort of baptized in ice and then rose from the fires like the phoenix. There’s also a universe where Cheryl doesn’t believe she needs help and feels like if she survives what she survived it’s for a reason and it’s made her stronger.

Access: But hold on, the courts will decide if somebody who commits arson needs help, right? That would be something that potentially a court would say, ‘You need to –’
Roberto: 100 percent. But who’s to know what will be said about that fire in Thorn Hill. Who’s to know what really happened in Thorn Hill — only Cheryl and Penelope. And if Penelope can’t say what’s happened, the person’s word we’re going to have to take is Cheryl’s. So who knows what the courts will think about that fire.

Access: Got it. Good point. You know, the teenagers have been through a lot this season. Are we going to be diving into the consequences of some of the things that happened in Season 1? I mean, look, we had a kid who tried to commit suicide, we had a whole bunch of kids who watched a murder of someone their age in a video, which [is] traumatic … arson, a kid whose dad’s in jail and is juggling family things, another kid whose dad was shot in front of him. How much are you getting into the psyche of kids in Season 2?
Roberto: We’re doing all of that. I think absolutely we’re going to delve deep into everyone’s psychologies and you laid out all these huge events and we’re going to play the consequences of those events and they’re really going to kind of be the driving force of Season 2. For instance, you know, I think the biggest person is Archie. … Archie saw his father gunned down in cold blood right in front of him … And, you know, for me it’s sort of like as monumental a moment and as defining a moment as when Bruce Wayne sees his parents get gunned down in Crime Alley, or when Peter Parker learns that his beloved Uncle Ben was killed by the burglar. Those are defining moments that change their lives forever and I think the same will be true of [Archie].

Access: So Fred’s dead then, is that what we’re saying?
Roberto: I’m saying you have to tune into the season premiere to find out. But, I’ll say this, we’re absolutely in a world where that can happen.

Access: So does Molly [Ringwald] then come back? Are you in talks with her to bring her back more strongly in Season 2?
Roberto: We all loved Molly as Mary and I think Molly had a good time and I think the fans loved seeing her, so Molly doesn’t need a reason to come back to Riverdale — it’s an open door invitation. But yes, this would seem to suggest that perhaps [Mary] will come back to take care of Archie.

Access: But you are thinking about it for Season 2?
Roberto: I think in the grand tradition of Chekov and soap operas, if you introduce a mysterious secret brother — or the idea [of one] — usually you want to meet that person. And in true Riverdale fashion, you’ll meet them probably at the absolute worst time.

Access: I wanted to ask you about Jughead in the finale – when he got the offer at the door from the serpents, he got this glint in his eye. It looked like he was happy.
Roberto: Yeah, you know, we talked about him putting on that leather jacket was him sort of slipping into a skin that finally fit and this is a kid whose sort of big story or need in Season 1 was belonging, to have a sense of family and to find his tribe, and I think that might be what happened in that moment, you know? In the [writers’] room, we talk a lot about ‘The Godfather’ and that last moment where Diane Keaton is looking through the doorway and she sees Al [Pacino’s character] Michael Corleone being surrounded by the mob and that’s what this moment is like for Betty and Jughead. She sees Jughead sort of wade deeper into these darker waters.

Access: In Season 2, do you know if you’re going to do a time jump or anything like that when you sort of restart the show?
Roberto: You know, really, in Season 1, we kind of never did a time jump. Things happened and then we sort of played the next thing – the consequences, moving on. So I think it’s such a huge thing what happened with Archie and Fred that I kind of think it would be a cheat to jump over kind of the immediate aftermath of that, so I don’t think we’re going to do a time jump.

Celebrities and their Sunglasses