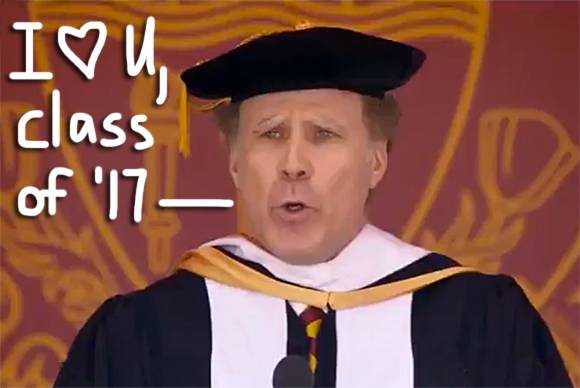 Though how can they not with a glorious send-off like this?

Will Ferrell delivered an epic commencement speech to the 2017 graduating class at the University of Southern California on Friday, in which he dropped some sage advice — and a little Whitney Houston.

Video: Will Brings Back His George W. Bush For Samantha Bee!

The comedian got serious when speaking to the large crowd at his alma mater about the meaning of success, admitting that his views on the subject have nothing to do with his entertainment career. He explained:

“To me, my definition of success is my 16-and-a-half year marriage to my beautiful and talented wife, Vivica. Success are my three amazing sons … no matter how cliche it may sound, you may never truly be successful until you learn to give beyond yourself. Empathy and kindness are the two signs of emotional intelligence.”

The Anchorman star closed out his 25-minute speech with a touch of comedy by singing a Will-arious rendition of the undying love ballad I Will Always Love You.

We don’t want to overhype it, but the actor’s sweet croonings sounded like a combination of Fergie and Jesus. Ch-ch-check it out (below)!

Dr. Will Ferrell (’90) serenades @USC‘s graduating class of 2017 to Whitney Houston’s “I Will Always Love you” after beautiful speech. ❤️? pic.twitter.com/PTiGaqdMhl
— Kay Angrum (@kayangrum) May 12, 2017