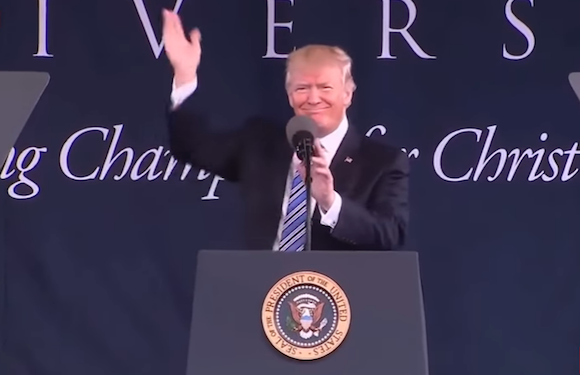 Your esteemed President, Donald Trump, was granted an honorary doctorate of law at Liberty University earlier today in Virginia, and he spoke at their graduation ceremony, as well.

Donald Trump likes to grab women “by the pussy.”

Match made in heaven?

The Donald talked about the shake-up he’s failing trying to accomplish in Washington, while also giving out ham-handed compliments and wishes of good luck to the reportedly Christian graduates who sat through this thrice-married “grab ’em by the pussy” loving President’s speech.

Watch the full thing (below):

Melania Trump Is Trapped In Her Hamburg Hotel Thanks To G20 Protesters — Uh...