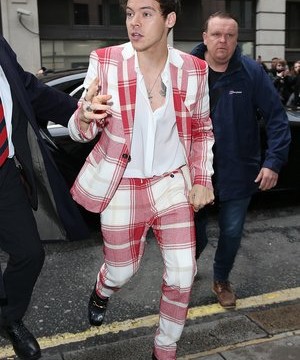 The “Sign of the Times” singer will star in his very own Carpool Karaoke segment, “Late Late Show” host James Corden announced on Monday’s episode.

“He’s gonna help me get to work on Thursday,” James told viewers of Harry, also tweeting the news with the catchy hashtag “#CarpoolHarryoke” from the official “Late Late Show” Twitter account.

Harry previously appeared alongside his One Direction members for the viral sensation, but this week’s clip will mark his first solo outing in the passenger seat next to James.

The 23-year-old Brit also kicked off a four-night “Late Late Show” residency. He’ll be performing different songs off his new self-titled album as his stint on the show continues.

Despite a funny sketch showing Harry encountering security clearance trouble at the studio, it seems in real life he’s had no problem fitting in with the “Late Late Show” family.

“I tell you what @Harry_Styles has really become part of the team and it’s only day 1,” James tweeted on Tuesday morning, captioning a photo of Harry and a few “Late Late Show” staff members surrounding James’ desk as they go over show notes.

When Aaron mentioned that he keeps a coop of chickens named after the Kardashian-Jenner crew, Harry took an exaggerated sip from his mug upon hearing Kendall’s name.

Things only got more awkward when James chimed in, asking if the birds “lay every day.”

Woman Kicked Out Of Pool Because Her ‘Curvy’ Body Was Deemed ‘Too Inappropriate’ For...