Celebrities Latest
Home Celebs Jimmy Fallon Admits He Was ‘Devastated’ Over Backlash From That Donald Trump... 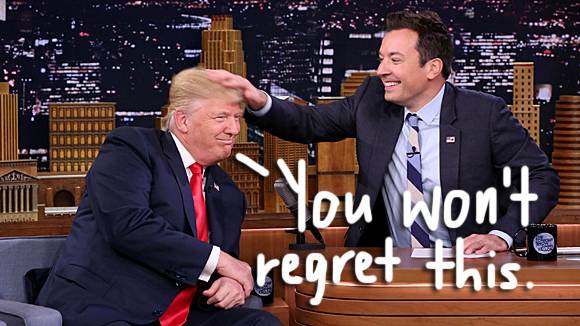 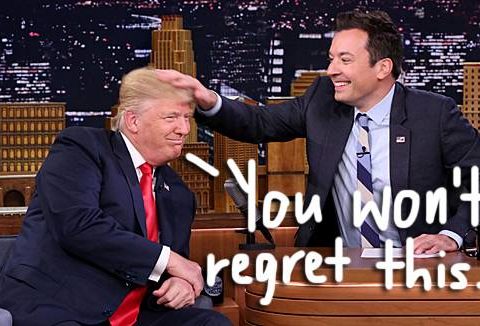 What’s the harm in trying to have a little fun?

For Jimmy Fallon, it’s nationwide criticism and losing command of the late night zeitgeist — if that “fun” is giving Donald Trump a chummy hair tousle on The Tonight Show.

The affable late night host finally opened up about his widely-scorned interview with the future President in a new interview, and it’s not exactly something he’s laughing about.

In fact, Fallon said he was “devastated” from all the backlash he got, telling The New York Times:

“I’m a people pleaser. If there’s one bad thing on Twitter about me, it will make me upset. So, after this happened, I was devastated. I didn’t mean anything by it. I was just trying to have fun.”

We believe you, Jimmy! That’s your job, after all.

But compared to the political savagery of late night rivals Stephen Colbert and Seth Meyers, Fallon’s silly Trump interview was viewed as brushing aside issues like the politician’s inflammatory campaign rhetoric — a message Jimmy received loud and clear:

“[People] have a right to be mad. If I let anyone down, it hurt my feelings that they didn’t like it. I got it.”

Though when looking back on it, the Saturday Night Live alum defended the infamous hair tousle, explaining of his decision:

“I didn’t do it to humanize him. I almost did it to minimize him. I didn’t think that would be a compliment: ‘He did the thing that we all wanted to do.'”

Eh, we don’t know about that — after all, Trump invited supporters to do the same thing on his campaign trail.

While the comedian did mention the controversy when he hosted the Emmys later that fall, he feels like the opportunity to address the incident has “sailed.”

Still, Fallon does regret how he handled the aftermath of the situation, admitting:

“I didn’t talk about it, and I should have talked about it… I regret that.”

But at the end of the day, the popular late night host’s biggest concern is making his audience laugh — which includes Trump supporters:

“I tossed and turned for a couple of weeks, but I have to make people laugh. People that voted for Trump watch my show as well.”

Good point there! Trump supporters do need a late night sanctuary where they won’t have to listen to Colbert roasting their President or Corden rapping to Hamilton.

Jimmy Fallon Admits He Was ‘Devastated’ Over Backlash From That Donald Trump Interview: ‘I Was Just Trying To Have Fun’!