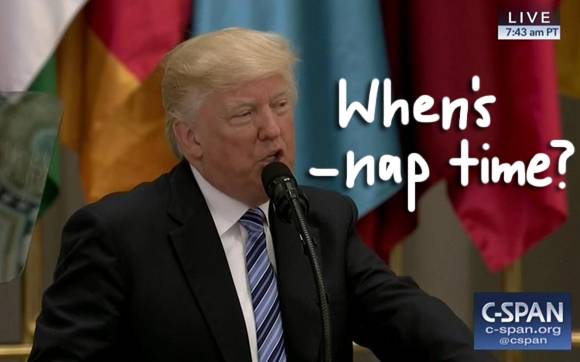 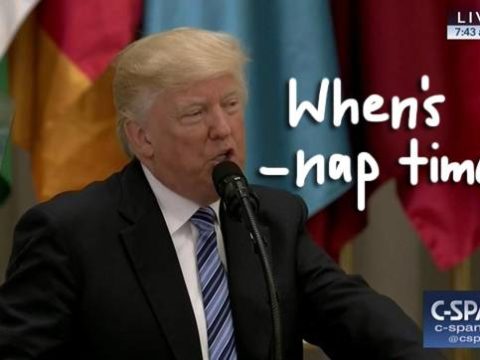 It’s an exhausting task just to keep up with our very “active” president.

So, it’s no big shock that months of golfing, deflecting blame, and high-energy rants are starting to catch up with Donald Trump.

POTUS mixed up some crucial wording during his highly anticipated speech in Saudi Arabia on Sunday, a flub White House officials attributed to him being “exhausted.”

While Trump was speaking to leaders of over 50 Muslim majority nations, he slipped when mentioning “Islamic extremism” — which is much different than what he was supposed to say: “Islamist extremism.”

This flub might go unnoticed to the average U.S. listener, but the terminology could mean the difference between offending Middle Eastern allies and not.

“Islamic” is a reference to the religion, while “Islamist” refers to political movements that seek to implement Islamic law and theology, making the former much more offensive to pair with talk of terrorism.

Of course, we wouldn’t expect Trump to care about that stuff, seeing as how he repeated the more controversial phrase “radical Islamic terrorism” on the campaign trail to criticize Barack Obama‘s political correctness on the matter.

Twitter critics were quick to point out POTUS was “exhausted” after visiting just one country — while Hillary Clinton probably would have finished her second world tour by now.

See some reactions to Trump’s exhaustion (below)!

For a guy who plays at least 18 holes of golf each weekend surprised at how easily Trump gets exhausted after only one day of foreign travel
— Adam Blickstein (@AdamBlickstein) May 21, 2017

Three days into his trip, Trump is “exhausted.”

Trump is “exhausted” in his FIRST country.

@mmpadellan @CHHolte @realDonaldTrump He mocks Hilary for working whilst being ill with pneumonia. Trump takes one weekend off golfing and is exhausted.
— @Glamorglass (@Glamorglassmk) May 22, 2017

WH officials say Trump is exhausted. In fairness, he’s the 1st President to keep campaigning 5 months after the election.
— Tim Hanlon (@TimfromDa70s) May 22, 2017

We guess POTUS isn’t as fit as he says he is. Sad!

Politi-celebs: 15 Stars Who Have Dipped Their Toes In Politics!