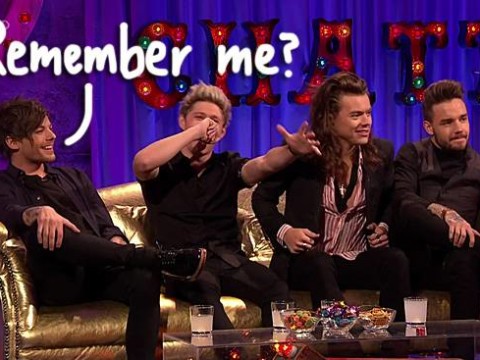 Remember the days where only one member of the disbanded boy group went solo?

Louis Tomlinson sure does, and he knows the odds are unfavorably stacked against him when it comes to having as much solo success as his former One Direction bandmates have earned.

In a self-deprecating interview with The Guardian, the singer discussed the solo efforts of his former band-mates — Zayn Malik and Harry Styles both released albums that debuted at No .1, Liam Payne and Niall Horan both dropped singles that cracked the Hot 100 — and made it clear his case was much different.

The chart-topping singer called himself “forgettable, to a certain degree” compared to the rest of the group. He pointed out that Niall is “fearless,” Zayn “has a fantastic voice,” Harry “comes across very cool,” and Liam’s “all about getting the crowd going”… “And then there’s me.”

Awww, who knew he felt like the sad, leftover direction??

While the 25-year-old will be releasing a new single called Back to You soon, he admitted that putting together his solo record was much harder than any album he’s recorded with 1D, mostly because the top-tier songwriters he used to work with are apparently not as willing to collaborate with just him.

“I couldn’t say to you that I could definitely get a superstar writer in a session with me. And I understand that. … Harry won’t struggle with any of that.”

We can’t all be Harry Styles, that’s for sure!!

Though Louis still has plenty going for him in addition to his upcoming EP — a newborn son and his own record label — he hints that he might have gotten an earlier start on his solo project if it wasn’t for the death of his mother in December 2016, continuing:

“Sometimes my reservation, or my confidence, might have prevented me from doing something. And I’ve needed a mum in the past to kick me up the arse and go: ‘You’re doing it.'”

Seeing as it’s only a matter of months until the singer releases his own music, we think he’s very much “doing it” in his own time!

Do U think Louis has just as good a chance at solo success than the rest of 1D?