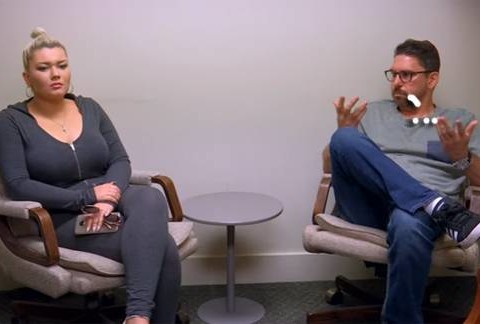 The hits keep coming for Amber Portwood and Matt Baier!

So, how did things go so wrong?

It turns out after the couple attended the MTV Movie Awards in Los Angeles, the momma of one was told Matt tried sleeping with someone else! From there, the 27-year-old had him undergo the lie detector.

While he passed the first two questions about if he ever cheated on Amber, things got very tense when the polygraph administrator revealed the one he didn’t pass:

“Did you make any sexual advances toward [bleep]? On that question, Matt answered no, but he did not pass that question.”

Furious with her partner, the reality TV star stormed out of the room and even punched the wall of an elevator!

“It’s a very vague question. I passed the direct ones. I’m sorry she’s upset but I didn’t do anything wrong. I didn’t cheat. I never would and when she settles down, she’ll realize that. That’s the important thing. I win. I passed.”

Um, whether or not someone agreed to sleep with you doesn’t affect whether you TRIED. Ugh.

Unfortunately for him, she seemed more concerned about what to tell her daughter Leah:

“What is she going to say to me? I wasted seven years of my life with a man, then I wasted three years of my life. My teenage years and my 20s. Is it me? I’ve been through so much shit. I just want a break.”

As we previously reported, rumors are swirling Amber and Matt have signed up for Marriage Boot Camp, so this definitely isn’t the end to their love story!

Anyway, ch-ch-check out a peek of the tense Teen Mom OG episode (below):

Teen Mom OG’s Amber Portwood Flips OUT On Matt Baier Over The Results Of His Damning Polygraph Test!