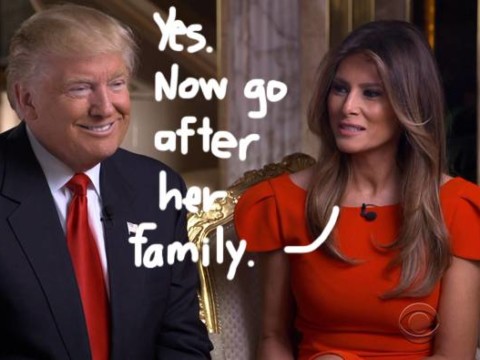 People sometimes paint the President’s third wife as some kind of princess being held prisoner by an ogre, but it’s situations like this where her true dark colors shine through.

VOTE: Do You Hate Melania As Much As Dan Savage Does??

When asked about Trump’s disgusting tweets about Morning Joe pundit Mika Brzezinski, the FLOTUS took a break from her hard work fighting cyber-bullying to release a statement in support of her hubby.

“When her husband gets attacked, he will punch back 10 times harder.”

Punching back “10 times harder” is one of those things meant to sound badass — unless you take 5 seconds to think about it.

We mean, if your frenemy mentions you falling off your diet, do you really want to respond by taking a shit in her purse, hooking up with her man, and framing her for murder?

Trying to destroy everyone who disagrees with you is what an insane person does. We mean, where does this vindictive, petty attitude end?

This is a policy of escalation and NOT becoming of a President of the United States of America. No wonder Trump has so many enemies. And he’s only making more for our country.