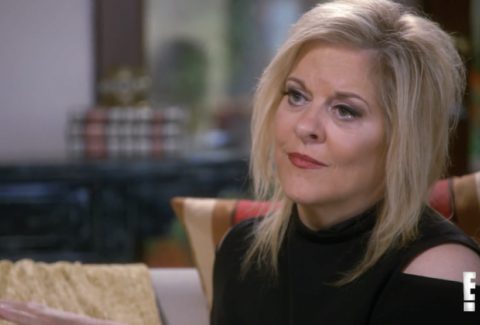 What a harrowing episode!

We’ve seen Hollywood Medium Tyler Henry talk to a lot of stars about their late loved ones, but we can’t remember seeing him connect to the victim of such a violent murder.

But in tonight’s episode, Nancy Grace thinks he’s talking to her late fiancé.

If you didn’t know, the 1979 murder of Keith Giffen is what spurred Nancy to get into prosecution and victims’ rights.

Tyler broaches the subject by saying he was connecting to someone who wasn’t “supposed to die that day.”

“He had gotten a job over the summer on a construction crew actually and a guy that had been fired from the job came back with a gun and he unloaded the whole gun on Keith — around his face, neck, and back. And that’s what happened. It was not an argument. They didn’t really know each other at all. But he was at the wrong place at the wrong time.”

See the sad moment (below):