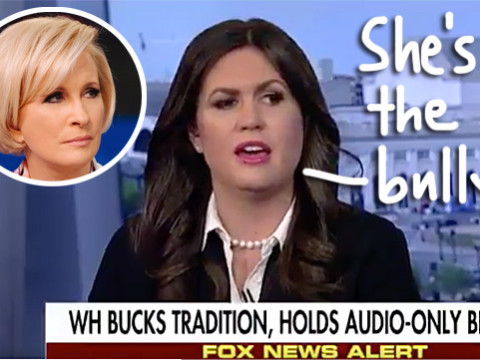 The President exhibited some mean girl-ish behavior on Thursday when he fired off nasty tweets about Morning Joe cohost Mika Brzezinski, claiming she had a “low I.Q.” and recently got a facelift.

While Mika issued a flawless clap back to POTUS’ string of insults, many criticized the Cheeto in Chief for his inappropriate smackdown on a cable news journalist.

But wait! Sarah Huckabee Sanders wants you to know that this time, it’s NOT the President’s fault!

The Deputy Press Secretary went on Fox News to defend her overlord, making it clear that the MSNBC host had the wrath of Trump coming!

“I don’t think that the president has ever been someone who gets attacked and doesn’t push back. There have been outrageous personal attacks not just on him but on everyone around him.”

Oh, now we get it. Trump’s just a helpless victim trying to stand up for himself — poor thing!

Sanders went on to say that the President’s defensive tweeting is actually a sign of strength and vitality, continuing:

“People on that show have personally attacked me many times. This is a president who fights fire with fire, and certainly will not be allowed to be bullied by liberal media, or the liberal elites within the media, or Hollywood, or anywhere else.”

So there! The leader of America exchanging petty blows with a TV personality is an ADMIRABLE QUALITY!

Sure, Brzezinski and fiancé/cohost Joe Scarborough have been giving a rather blistering commentary about Trump lately, openly questioning the President’s mental state on their show.

But the fact that Trump continues to be triggered by speculative cable news commentary — and be upset enough to launch an attack of his own — makes him closer to a Real Housewife than a world leader.

Ch-ch-check out the clip (below) to hear Trump’s side of the story:

The White House response: “This is a president who fights fire with fire and certainly will not be allowed to be bullied by liberal media.” pic.twitter.com/R5VO8vXCyP
— Kyle Griffin (@kylegriffin1) June 29, 2017