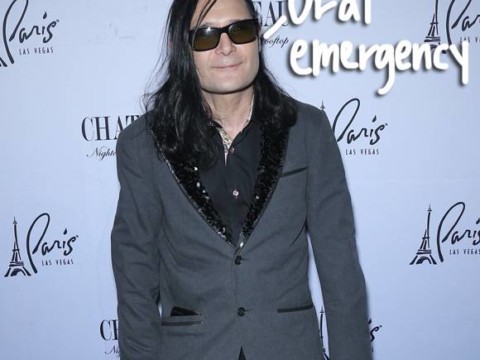 Corey Feldman never fails to give a memorable performance.

The movie star turned singer went all out during his concert in Milwaukee on Wednesday — so much, that he ended up injuring himself on stage.

As he danced around singing his song Something in Your Eyes, the performer accidentally slammed his microphone into his mouth and knocked his tooth out!

Related: Carrie Fisher Tried To Help Corey Get Off Drugs

While his all female band of “Angels” kept rocking their way through the song, Feldman immediately stopped singing to search the area for his fallen pearly white.

After the crowd asked what was going on, the Lost Boys star returned to the stage and broke the news to the audience, saying:

“You guys, I smashed myself in the face and my tooth came out… I gotta go find it so I can give it to the dentist.”

It’s unclear from the video if Corey retrieved his tooth, but he seems to be smiling about the situation on Twitter, writing:

THE SHOW MUST GO ON! Watch Corey Feldman lose a tooth while performing and stop show to look for it https://t.co/uGPjcMbDxQ
— Corey Feldman (@Corey_Feldman) June 30, 2017

How will he outdo himself next!? Ch-ch-check out the video (below) to see the injury!

Corey Feldman Knocks His Tooth Out Mid-Concert & Stops The Show To Find It — Watch!

Mayim Bialik Responds To Backlash From Harvey Weinstein Article — ‘I Really Do Regret...