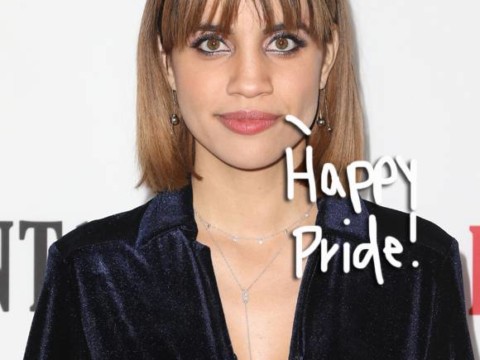 Actress Natalie Morales is using her fame for good!

The former Parks and Recreation star opened up to the public in a letter posted to Amy Poehler‘s site Smart Girls, in order to shed light on acceptance of the LGBTQIA+ community.

Because she’s decided to come out to the world as queer.

Related: JAY-Z’s Mom Comes Out As A Lesbian On His Album

In her very candid essay, Natalie wrote about her experiences growing up being attracted to boys and girls:

“I am not attracted specifically to any type of gender. I’m attracted to people. Each person is their own incredible, massive universe. That is what I am attracted to; that is what I want to know, want to love, want to defend, want to take care of. I don’t like labeling myself, or anyone else, but if it’s easier for you to understand me, what I’m saying is that I’m queer. What queer means to me is just simply that I’m not straight. That’s all. It’s not scary, even though that word used to be really, really scary to me.”

This came after the 32-year-old revealed that while she would like to hold onto having a private life for so long, she couldn’t not speak up any longer.

Putting it so eloquently, she continued:

“I know this isn’t some big, life-shattering revelation that everyone will be shocked by. The reason I decided to share this with you and with the world is because even though me telling you I’m queer might not be a big deal these days, things are still pretty bad out there for people like me. There are gay concentration camps in Chechnya where people are being tortured right this second. In our very country, 49 people were killed and 58 people were wounded just last year because they were dancing in a gay club. Our safe spaces are not safe.”

Most of all, with Friday marking the last day of Pride month, she went on to say:

“I think it’s important that I tell you that this familiar face you see on your TV is the Q part of LGBTQ, so that if you didn’t know someone who was queer before, you do now. I also think it’s important that if there are any scared kids out there, like I was, I can tell you that whole ‘It Gets Better’ campaign is true. It does. And you’re not weird. You’re not bad. You’re not unholy. You’re exactly what God intended you to be. You are exactly what you are supposed to be, because nothing is supposed to be anything except for what it is, even if not everyone understands that. You are an essential part of the world just as you were created, and I want to see you. The real you.”

We are so about this!

More people need to be understanding of others, and know that it’s perfect to just be who you are!

You can read her full piece HERE.