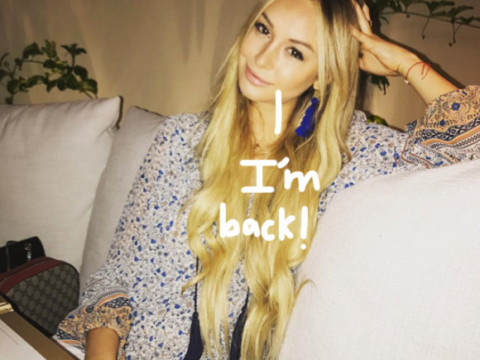 They say a picture is worth a thousand words!

Following her brief but scandalous stint on Bachelor In Paradise, Corinne Olympios has remained radio silent on all of her very active social media channels — until now!

Related: Corinne Completed Her Own BIP Investigation & The Findings Are In!

On Monday, she decided to break her silence. Instead of a lengthy message to fans, the reality TV star posted a pic to Snapchat and allowed followers to read in between the lines:

Later she posted the top pic to Instagram, with the simple caption:

ICYMI, on June 11 ABC stopped filming Bachelor In Paradise when two producers filed internal complaints after a potentially nonconsensual sexual interaction between Corinne and her co-star DeMario Jackson. The alleged misconduct was investigated, cleared, and they have since resumed filming without DeMario or Olympios.

We’re glad things are returning to normal for the blonde business woman!