Celebrities Latest
Home andy Iggy Azalea Reveals She’s Collaborating With Someone Who Once Threatened To Kill... 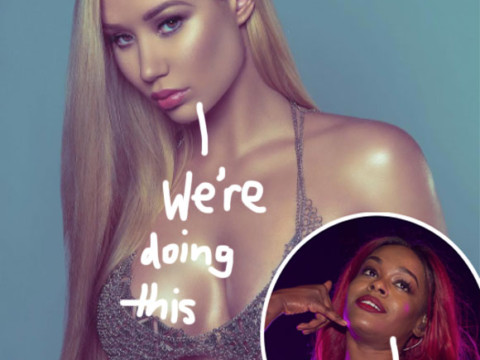 Related: Iggy Offers Up A Mariah Carey-esque Clap Back To Halsey: ‘I Don’t Know Her’!

In a string of social media posts Monday, the Fancy rapper shared the two have officially buried the hatchet. First up, was the Snapchat announcement:

I dont expect you guys to understand why i would collaborate with someone who has publicly said they hope i die.
— IGGY AZALEA (@IGGYAZALEA) July 3, 2017

This has been something extremely negative for so long, if there is a way to make it positive and also be creative together, im here for it.
— IGGY AZALEA (@IGGYAZALEA) July 3, 2017

We guess this shouldn’t come as too much of a surprise though, as Iggy and Azealia publicly made up in June — the controversial artist posted a message from Iggs on her social media:

“Call me crazy, but girl; I don’t hate you. I don’t know you to hate you,. I believe you may want to meet me in person so you can steal a lock of my hair and cast a spell hoping I die (lol) I don’t agree with many of your opinions but honestly, at times I empathize with you as a creative Gemini woman. I wish you had spoken to me before deciding I was out to get you when we first came on the scene, but that’s also typical Gemini reaction s–t (I get it). As a 27-year-old adult woman just know: I wish you well from one human to another and joke collaboration or not as adults we should move past trivial beef with strangers.”

Consensus is the New Classic‘s fans are PISSED! After fighting since 2011, where things got verbally violent and racially charged, many believe this is the wrong move.

What do you think? SOUND OFF in the comments (below)!

Iggy Azalea Reveals She’s Collaborating With Someone Who Once Threatened To Kill Her — Azealia Banks!

Serena Williams Is Still In Beast Mode While 8 Months Pregnant! Watch Her Go!