Celebrities Latest
Home bet Maria Menounos Reveals Why She Waited To Tell Her Parents About Her... 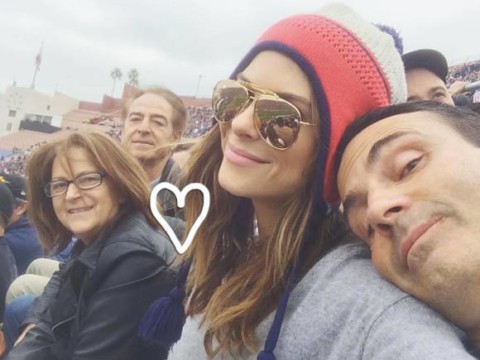 What a tough situation.

As Maria Menounos‘ mother, Litsa Menounos, battles stage four brain cancer, the former E! News anchor learned she had a benign meningioma pressing on her facial nerves. Understandably, the brunette stunner dreaded the idea of telling her parents about her tumor as they had already been through so much.

During her sit down with People, the TV personality explained:

“Deciding to tell [them] was the toughest part… If my mom was stable, it would have been easier. But because her tumor was growing [at the time], it was really depressing. It was awful because we were all living in this house and keeping this secret.”

Talk about a tense scene. Nonetheless, Maria and her fiancé, Keven Undergaro, ultimately decided to tell Mr. and Mrs. Menounos about the 39-year-old’s condition. The talk with Litsa and Costas was particularly upsetting as the twosome kept thinking the love birds were announcing they were pregnant. (In case you were unaware, the Massachusetts native has been undergoing IVF treatments in the hopes of starting a family.)

“We went into their room and I said, ‘We have something to tell you.’ Every time I say it, people say, ‘You’re pregnant!’ And it’s like, ‘No, it’s not a good thing.’ I said, ‘I want you to understand that you have brain cancer, but not all tumors are cancerous. We found a tumor in me. We’re going to have surgery on Thursday.'”

According to Maria, Litsa and Costas “welled up” and were “in shock” upon learning the news, but Undergaro and Menounos made sure to reassure them “it would be fine.” Although Maria’s mom was shaken up about her daughter’s health scare, Maria credits her mom’s strength as her source of inspiration during this difficult time.

On how Litsa has become her role model through all of this, Maria concluded:

“She has smiled through the whole thing. She’s always been positive. Always ‘I feel great,’ just a champ. My goal was just to be as happy and calm as possible because I didn’t want it to be hard on everybody. I really prayed, ‘Please God give me the strength that my mom had.’ Because she gave us that gift.”

Awwww. We’re just glad that both Maria and Litsa are doing better these days.

*Hugs* to all those affected by this situation!

Dukes Of Hazzard Star Arrested For Indecent Assault After Allegedly Sticking A Finger In...