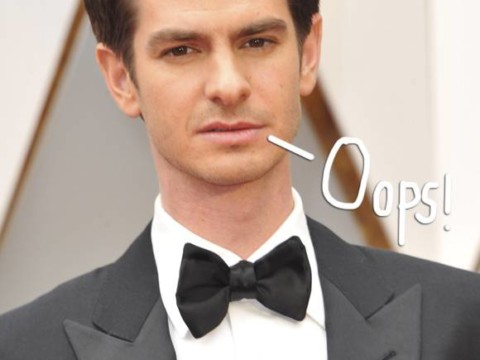 Andrew Garfield has SERIOUSLY put his foot in his mouth.

While promoting his role in Tony Kushner’s play Angels in America at a NT Platform discussion on Monday, the Hacksaw Ridge star opened up about how he prepared for the emotionally challenging part. In case you didn’t know, Garfield’s character in the celebrated hit struggles with the reality of AIDS during the height of the crisis in the 1980s.

Related: Natalie Morales Comes Out As Queer In Open Letter!

Now, we knew the British actor was a fan of RuPaul’s Drag Race as he stopped by the Werq the World Tour show in London, but we didn’t realize the program served as his main source of inspiration for his part in AIA. Emma Stone‘s ex explained:

“Every Sunday I would have eight friends over and we would just watch Ru. I mean every single series of RuPaul’s Drag Race. I mean every series. This is my life outside of this play. I am a gay man right now just without the physical act—that’s all.”

Well, well. The A-lister didn’t stop there as he added:

“As far as I know, I am not a gay man. Maybe I’ll have an awakening later in my life, which I’m sure will be wonderful and I’ll get to explore that part of the garden, but right now I’m secluded to my area, which is wonderful, as well.”

Of course, these comments have sparked quite the response from fans on Twitter as many have accused the 33-year-old of “queer baiting.” See some of the reactions (below).

Hey did you know that if you marathon Drag Race you are a gay man? That’s all it takes. Who knew. Thanks, Andrew Garfield.
— Lana del Lorde (@jiggatravels) July 6, 2017

Straight tourists who try on oppression for kicks make me so tired. Andrew Garfield and James Franco… guys… you will never understand.
— ? Hamish Steele ? (@hamishsteele) July 5, 2017

I like how Andrew Garfield’s view of being gay is having friends over to watch RuPaul.
— Eric M. (@thefilmviews) July 6, 2017

andrew garfield: i am a gay man right now JUST WITHOUT THE PHYSICAL ACT
me: pic.twitter.com/cxI6NHNDNj
— Erick (@Alwaystronger_5) July 6, 2017

So savage. Still, we’re not quite ready to cancel Andrew Garfield as an up-and-coming gay icon, as there were some positive statements from his panel discussion. Namely, the Oscar nominee said he was concerned about taking on the role as he questioned if he had the right to “play this wonderful gay role.”

What do YOU think? Should Andrew apologize for his comments?