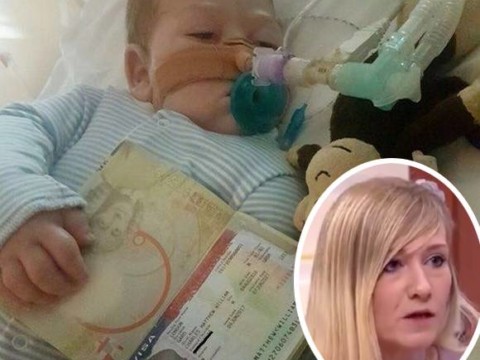 In case you haven’t been following the heartbreaking case of Charlie Gard, the U.K. infant is suffering from a rare degenerative disorder that requires machines to keep him alive.

Unfortunately, doctors say further treatment will only cause him to suffer more. Courts have already ruled the hospital can pull the plug, against the parents’ wishes.

But the fight has continued, with forces as disparate as the Vatican and Donald Trump agreeing that Charlie should be able to get experimental treatment in the U.S.

Everyone in the States, including the POTUS, seem to be on board. New York-Presbyterian Hospital and Columbia University Irving Medical Center stated it would gladly treat Charlie “provided that arrangements are made to safely transfer him to our facility, legal hurdles are cleared, and we receive emergency approval from the FDA for an experimental treatment as appropriate.”

Obviously those “legal hurdles” are the big impediment at the moment. Thus far Great Ormond Street Hospital has refused to release the 11-month-old.

Charlie’s mother Connie Yates appeared on Good Morning Britain on Friday to once again make the case that treatment was worth the risk. She said:

She also said docs have given her as high as a “10% chance” that the experimental treatment will help Charlie recover:

WATCH: The mother of #CharlieGard joined us this morning and made an appeal to Prime Minister Theresa Mayhttps://t.co/ZjGYFKOXdt pic.twitter.com/EkY6hcAU9P
— Good Morning Britain (@GMB) July 7, 2017

GMB also had on an expert the previous day, Dr. Robert Winston, who said he believed the hospital was actually looking out for Charlie’s best interests. But even he agreed that the parents should ultimately be allowed to make the decision:

New York-Presbyterian has also offered to send the medication and instructions to Great Ormond, but so far the U.K. hospital has not responded.

What do YOU think?

Charlie Gard’s Mother Says Doctors Think There’s A 10% Chance He Can Be Saved — Get The Latest!