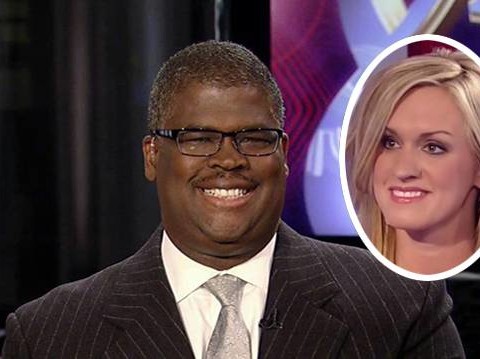 According to Huffington Post, Making Money host Charles Payne is being sued for harassment by Scottie Nell Hughes.

Related: You May Remember Hughes From Her Fight With SNL

The conservative analyst formerly of CNN used to appear on the network frequently, leading to an affair with the Fox Business personality.

HuffPo‘s sources say the affair was a poorly kept secret that even included the two sharing a hotel room on a work trip in 2015 — despited both being married!

Apparently Hughes even attended a party at Payne’s home, and the couple’s interactions led his wife to call up boss Bill Shine, who stopped Hughes from appearing on the network.

Payne did confess to the affair, telling The National Enquirer:

“I would like to extend an apology to my family and friends for having been involved in a romantic affair that ended two years ago.”

But so far he’s denying any “sexual harassment.”

21st Century Fox has once again hired Paul Weiss, the same law firm that looked into Gretchen Carlson‘s claims about the late Roger Ailes, to do an internal investigation.

In a statement to HuffPo, a Fox Business spokesperson said:

“We take issues of this nature extremely seriously and have a zero tolerance policy for any professional misconduct. This matter is being thoroughly investigated and we are taking all of the appropriate steps to reach a resolution in a timely manner.”

Sounds like a lot of illicit behavior but not at all like the harassment stories we’ve heard of Bill O’Reilly and others.

We’ll let you know when more info comes to light!

MORE Sexual Harassment At Fox! Find Out How An Extramarital Affair Turned Into A Lawsuit!

Celebs Who Went From Fuckboys To Fab Partners!