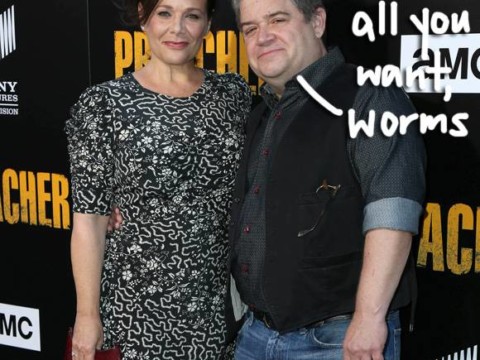 Don’t hate him cause he’s happy!

Patton Oswalt‘s recent engagement has drawn ire from social media critics who say the comedian is moving on too quickly following the death of his wife Michelle McNamera.

The widower and actress Meredith Salenger announced their engagement last week, 15 months after Oswalt’s wife passed away from an undiagnosed heart condition.

Since going public with their relationship, Oswalt and Salenger have not been shy about showing off their love on social media — which sparked some criticism among armchair experts who apparently wanted the actor to grieve a little longer before finding happiness.

But Oswalt said he wasn’t giving those “bitter grub worms” the time of day when he spoke out on the engagement over the weekend.

Roman, who became a widower at age 27, put Oswalt’s critics on blast, writing:

“You aren’t entitled to an opinion. You don’t get to comment on the choices of a widower while you sit happily next to your own living spouse. You didn’t have to stand and watch your mundane morning turn into your absolute worst nightmare. Go back to scrolling Facebook and keep your ignorance to yourself.”

Salenger also shared Roman’s article, along with a note in which she spoke on honoring “the brilliant gift Michelle has given me.” She wrote:

“I have waited 47 years to find true love. Creating our family unit while honoring the brilliant gift Michelle has given me will be my life’s goal and happiness. I am deeply in love with both Patton and Alice and very much looking forward to a beautiful happy life having adventures together.”

We’re so happy that Patton has found happiness again — not to mention his daughter Alice, too!

Read the couple’s messages to the haters (below)!

Away, trolls — you have no power here!