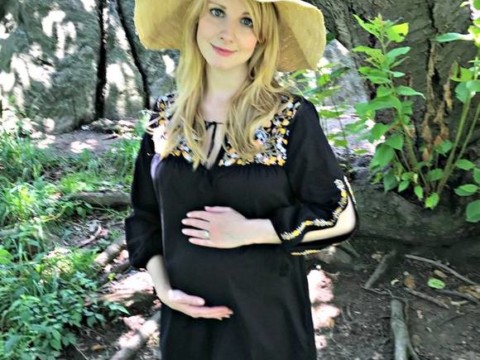 Pregnancy can be equally as terrifying as it is exciting.

Especially for Melissa Rauch, who revealed that suffering a previous miscarriage has added a ton of anxiety to her current pregnancy.

In an essay for Glamour, The Big Bang Theory star detailed how she and husband Winston Rauch are expecting a baby this fall. But if the 37-year-old had it her way, she’d hold off on announcing the pregnancy “until her child heads off to college”!

Photo: This Dog Maternity Shoot Is Too Damn Beautiful!

That’s because the actress is “pretty much terrified” she’ll have another miscarriage, as that’s exactly what happened the last time she became pregnant.

In her candid piece, Rauch admitted to harboring extreme jealously over every pregnancy announcement she heard about while struggling with her own fertility issues, writing:

“During the time when I was grieving over my pregnancy loss or struggling with fertility issues, every joyful, expectant baby announcement felt like a tiny stab in the heart. It’s not that I wasn’t happy for these people, but I would think, ‘Why are these shiny, carefree, fertile women so easily able to do what I cannot?'”

Incidentally, it was thinking about all the other women with similar struggles that inspired Rauch to be so honest in her own pregnancy announcement.

The actress said finding out she had lost her baby was “one of the most profound sorrows I have ever felt in my life” that “kickstarted a primal depression that lingered” in her, recounting:

“The image of our baby on the ultrasound monitor — without movement, without a heartbeat — after we had seen that same little heart healthy and flickering just two weeks prior completely blindsided us and haunts me to this day, I kept waiting for the sadness to lift … but it didn’t.”

Rauch confessed that when things didn’t get easier, she tried to speed up the grieving process — only to realize “thoughts like that have no productive place in grief.” She added:

“What I realized, though, is that because this kind of loss is not openly talked about nearly as much as it should be, there really is no template for how to process these emotions. You’re not necessarily going to a funeral or taking time off from work to mourn, but that doesn’t change the fact that something precious has been unexpectedly taken from your life.”

In the end, Rauch hoped her essay will shed bigger light on the subject of miscarriages and could help get rid of the “unnecessary stigma around it,” so that women who struggle with pregnancy loss and infertility will feel “less alone.”

So powerful. We applaud the actress on her bravery and hope she carries a full, healthy term!

Head to Glamour to read the mother-to-be’s full piece.