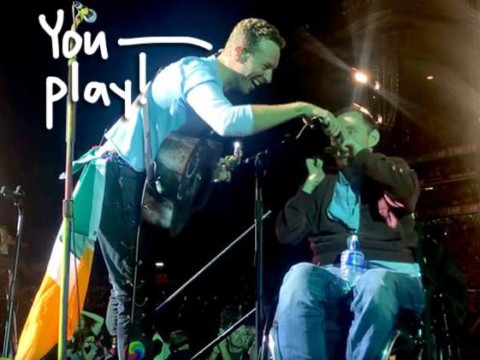 Chris Martin has made many a fan dream come true, but this one takes the cake!

The Coldplay frontman noticed a wheelchair-bound fan crowd-surfing at the band’s Dublin concert on Saturday and decided to give him a much better view!

As he laid eyes on a fan named Rob propped up above the crowd, the 40-year-old singer called on the audience to usher the concertgoer all the way to the stage.

After greeting the fan with hugs and cheers, Martin sang an improvised song about Dublin and Rob — who played along with the rocker on the harmonica!

“A lad accidentally fell on me and was extremely apologetic. He and his friends insisted on lifting me up and getting me a better view.”

Well, he got much more than a better view!

The Dublin native said he’s gotten quite a bit of attention following the “once in a lifetime experience,” continuing:

“83,000 people cheering as I was in the middle. I got a glimpse of a celebrity life. The video has gone viral since and my phone hasn’t stopped.”

AH-Mazing! Watch the video (below) to see the unforgettable concert moment.