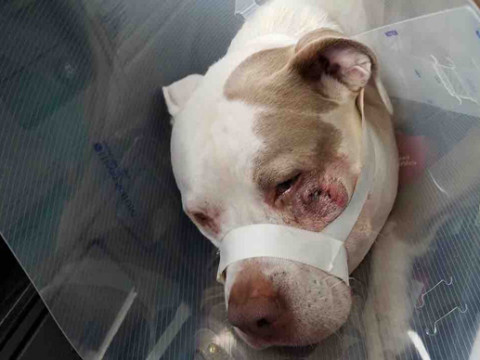 A police officer shot two emotional support dogs on Saturday, claiming that the animals charged at him — but video shared by the dogs’ owner indicates otherwise!

Ciroc (pictured above) and Rocko were in the gated backyard of their Minneapolis home when two cops came to the residence in response to a false burglary call.

Photo: Pregnant Dog Is GLOWING In This Maternity Shoot!

One officer hopped the fence to the yard and, according to the police report, was charged at by “two large size pitbulls.” Michael Mays, one of the responding officers, wrote in an initial report:

“While staging at the rear, two large size pitbulls charged at officer. Officer dispatched the two dogs, causing them to run back into the residence.”

But video uploaded by owner Jennifer LeMay seems to contradict the officer’s account.

The now-deleted Facebook video reportedly shows Ciroc calmly taking several steps in the direction of the officer — and even wagging his tail — before the officer appears to shoot the dog, causing him to stumble before scrambling away.

The second dog, Rocko, then briefly comes into view, and the officer is seen firing at the dog before the animal scurries off, apparently limping. Speaking to the Minneapolis-Star Tribune, LeMay said:

“Video surveillance doesn’t lie. [The first dog] wasn’t even moving, lunging toward him or anything … My dogs were doing their job on my property.”

LeMay and her family were off on a camping trip while a friend was looking after the dogs. LeMay’s two daughters came home early and accidentally set off the security alarm, causing the police to respond.

Police said they are investigating the incident and plan to review the video. Police Chief Jeneé Harteau said in a statement:

“I’ve watched the video, and as someone whose family has included dogs most of my life, I can say that it was difficult to watch. This was an outcome that no one wanted.”

A GoFundMe page has been created to cover medical bills for the injured Staffordshire terriers. Ciroc was shot in the jaw — and awaiting surgery that could run up to $7,000 — while Rocko has wounds to one side, face and shoulder.

Our hearts go out to these wounded pooches and hope they have a speedy recovery!