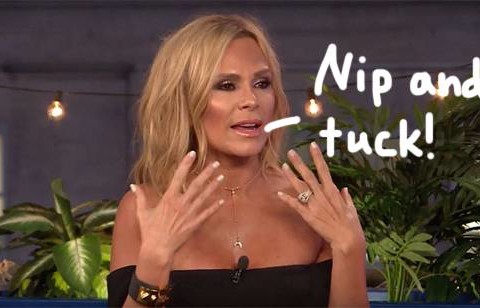 Her faith is strong, and her ass face isn’t bad either!

After the season 12 premiere of Real Housewives of Orange County on Monday night, Tamra Judge appeared on Watch What Happens Live where host Andy Cohen noticed something was different about her appearance.

That’s when the reality TV star admitted she had a nip and tuck LITERALLY 15 days ago! She revealed:

Because of all the fat she lost competing as a bodybuilder (as documented on season 11), the 49-year-old noticed her skin was “drooping” and paid a visit to OC plastic surgeon Dr. Milind Ambe. Instead of doing fillers, she decided to “pull it, don’t plump it.”

The surgery was so recent, the Bravolebrity had staples taken out from behind her ears just TWO DAYS earlier.

The entire situation even inspired Andy and Tamra to come up with her season 13 tagline:

“Don’t call it a facelift. Call it a comeback.”

To see the clip, ch-ch-check it out (below)!