Celebrities Latest
Home abuse Rob Kardashian’s Famous Fam Reportedly ‘Pleaded With Him To Stop’ Amid His... 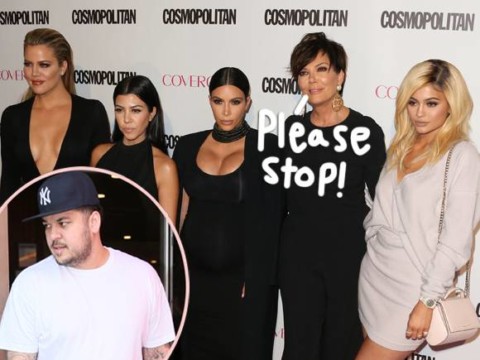 The KarJenners are “disappointed” in Rob Kardashian. Nooooooo, really??

And while Kardashian was just hit with a restraining order to stop harassing his baby momma, it seems his famous fam knew the situation would end badly. A source close to the situation dished to Us Weekly:

“They did not agree with what Rob posted and had pleaded with him to stop. They know this is a very combative relationship and everyone in the family is solely focused on Dream [Kardashian]; Chyna and Rob are adults.”

Preach. Sadly, this outburst from Rob didn’t necessarily surprise Kris Jenner and her brood as this kind of drama is typical for the Rob & Chyna stars. Of course, the E! powerhouses aren’t indifferent to the situation as they’re REALLY worried about what this fighting will do to the youngest Kardashian grandchild.

“This is not new when it comes to Rob and Chyna, but the concern, for Rob’s sisters and mom, is all about Dream.”

Thankfully, it sounds like the father-of-one isn’t proud of his online antics as his lawyer Robert Shapiro said the reality TV star “regrets” what he did and called the explosion “a spontaneous reaction.” Shapiro is set to take on Chyna’s claims that the KUWTK star abused her during the pair’s upcoming court date in August.

Sounds like we have some Rob vs. Chyna drama to look forward to then. Stay tuned!