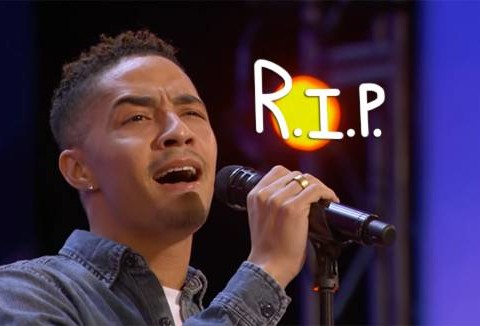 On Tuesday evening, America’s Got Talent honored Dr. Brandon Rogers by airing the late medical professional’s audition a month after his untimely death. As we previously reported, Rogers died unexpectedly after getting into a terrible car accident back in June. This complicated things for NBC as Brandon was a standout contestant for this season of AGT and his audition hadn’t even aired yet.

Related: Nelsan Ellis’ Loved Ones Comment On The Actor’s Death

However, in order to pay their respects to the doctor, the network fulfilled Brandon’s family’s request to have the audition hit the small screen. Before sharing the talented singer’s tryout, NBC noted in a statement:

“At the request of his family we would like to honor his memory by sharing his audition with you.”

Be sure to check out Brandon’s moving audition for yourself (below).

Unsurprisingly, after performing Stevie Wonder‘s Ribbon in The Sky, the deceased up-and-comer received four yeses from judges Mel B, Howie Mandel, Heidi Klum, and Simon Cowell. Not only was Brandon an incredible artist, but an all around good human too.

While speaking with the judges, Rogers revealed why he became a doctor:

“My inspiration for becoming a doctor was kind of born out of a pretty tough experience when I was six years old when I came home from school one day and found my mom laying in a pool of blood. We rushed her to the hospital, the doctors were like heroes. They saved her life and it made me want to be the doctor that I am today… I feel like I’m in a field where I’m actually making a difference, and there can be some tough days too. My way to cope with the stress has always been music. If I could find a way to combine being a doctor and medicine with music and singing that would be a dream come true.”

We’re honestly sobbing right now. Our hearts go out to all of Brandon’s loved ones following his tragic passing.