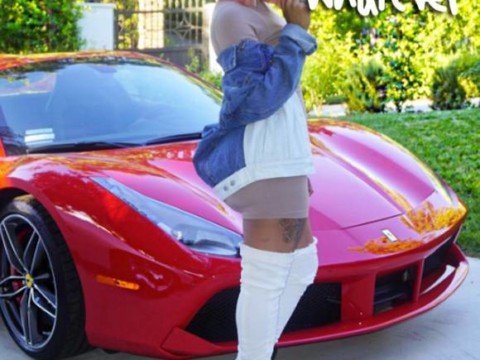 Blac Chyna isn’t about feeling like she’s in debt to Rob Kardashian at all!

It was reported the 29-year-old handed over the red Ferrari and the Lamborghini he bought her, as well as the jewelry he’s gifted her in the past.

Related: Chyna’s Supposed Ex Says She Bullied Him To The Point Of Attempted Suicide

In another part of her interview with ABC, Dream Kardashian‘s momma admitted she didn’t personally return them to her ex on the day he ranted about her on social media. Instead, she says she had her assistants do it!

“Once he posted all these things on the Internet, I had my two assistants drive the Ferrari and the Lamborghini, and took all the jewelry back to his house. Actually, to his mother’s [Kris Jenner] house, and had it dropped off. And I also gave him back his wedding ring. Because I’m not gonna let this man buy me — or make it seem like he could just buy me and give me gifts and treat me any way, and talk to me nasty.”

Sounds like it really is over if she finally returned the engagement ring, especially since she claims they had been broken up since December.

While the former flames are 100% over, the starlet isn’t trashing Rob completely, as she still had positive things to say about his parenting skills:

“Okay, so Robert has only been to my house two times. One to see where his daughter will be laying her head at, out of respect, number one. Number two, the second time that Robert has ever been to my house was on Father’s Day. Yes, we are broken up. And guess what? I’m a very nice person. And I wanted him, Dream and I to spend Father’s Day together. Because at the end of the day, he is a good father. I’m not gonna take that away from him.”

But as she also added, this Kardashian completely broke her trust by going so far as to post private pictures of her:

“This is a person that I trusted. I confided. I felt comfortable, you know, with even sending these pictures and even talking to him about certain things, you know.”

At least with her temporary restraining order against him, Chyna doesn’t have to worry about him posting about her — or even coming near her — for now!

Blac Chyna Explains Why She CHOSE To Return Her Engagement Ring & Other Expensive Gifts To Rob Kardashian!