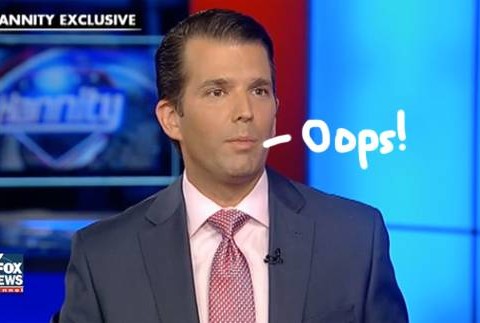 As we reported, Donald Trump‘s eldest son revealed on Twitter that he met with Russian attorney Natalia Veselnitskaya during the election in order to retrieve damaging dirt on then-opponent Hillary Clinton.

The meeting was set up by music publicist Rob Goldstone, whose pop star client Emin Agalarov knew of a Russian government official who was offering to provide the Trump campaign with documents that “would incriminate Hillary and her dealings with Russia.”

On Tuesday, POTUS’ offspring told Fox News‘ Sean Hannity he “probably would have done things a little differently” in regards to that June 2016 meeting.

“In retrospect I probably would have done things a little differently. Again, this is before the Russia mania; this is before they were building this up in the press. For me this was opposition research, they had something, you know, maybe concrete evidence to all the stories I’d been hearing about, probably under-reported for years not just during the campaign. So I think I wanted to hear it out. But really it went nowhere, and it was apparent that wasn’t what the meeting was about.”

The 39-year-old stresses no “meaningful information” was exchanged during the 20-minute sit-down.

“I wouldn’t have even remembered it until you started scouring through this stuff. It was literally just a wasted 20 minutes, which was a shame.”

To watch the clip, ch-ch-check it out (below)!

Watch the latest video at video.foxnews.com

Donald Trump Jr. ‘Would Have Done Things A Little Differently’ In Regards To Meeting With Russian Lawyer About Hillary Clinton Dirt! WATCH!